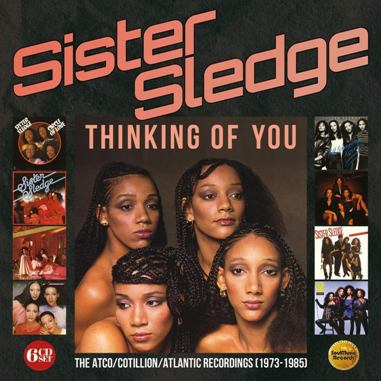 Sister Sledge are a bona fide household name, of course,  thanks to several big worldwide hits that sealed their immortality and confirmed their inclusion in the annals of popular music. Their most famous recordings include the empowering feel-good anthem ‘We Are Family,’ along with ‘He’s The Greatest Dancer,’ ‘Lost In Music’ and ‘Frankie,’ which, with their catchy refrains and danceable grooves, are indelibly seared into the consciousness of millions of people around the globe. But although Philadelphia sisters Debbie, Joni, Kim and Kathy Sledge have been stereotyped as a disco act, this comprehensive six-disc box set shows that they were so much more.

‘Thinking Of You’ spans twelve years and contains eight complete albums they recorded for three WEA-affiliated labels: ‘Circle of Love,’ ‘Together,’ ‘We Are Family,’ ‘Love Somebody Today,’ ‘All American Girls,’ ‘The Sisters,’ ‘Bet Cha Say That To All The Girls,’ and ‘When The Boys Meet The Girls.’ There is also a generous supply on bonus material, including several non-album singles and a clutch of 12-inch remixes (the latter are grouped on the final disc).

Though they shot to fame in 1979 when they teamed up with Chic’s main men, producers/songwriters Nile Rodgers and Bernard Edwards, the group’s recording career began six years earlier.  That was when as teenagers they signed to Atlantic Records’ Atco subsidiary and cut a clutch of non-album 45s.  Among them was the gorgeous, dreamy ballad, ‘The Weatherman,’ helmed by The Young Professionals (writers/producers Phil Hurtt, LeBaron Taylor and Tony Bell) and the funkafied dancer, ‘Mama Never Told Me’ (their first UK hit).  Both cuts are appended on this compilation to their debut album, 1975’s ‘Circle Of Love.’ That particular album, produced by Bert DeCoteaux and Tony Silvester, was a decent set, yielding the US R&B Top 40 hit  ‘Love Don’t You Go Through No Changes On Me.’ In between their next album, ‘Together,’ the girls released a couple of non-album singles, including ‘Thank You For Today’ and the Bobby Eli-penned and produced ‘Cream Of The Crop,’ which both made the lower reaches of the R&B singles chart. But ‘Together,’ their debut long-player for Cotillion,  is arguably Sister Sledge’s most overlooked work. Helmed by Michael Kunze and Silvester Levoy, it included the charting single ‘Blockbuster Boy,’ but unlike the sisters’ debut LP, failed to dent the R&B albums chart. Even so, it was a solid, if unspectacular, effort: its standout being a souped-up disco version of Stevie Wonder’s ‘As.’

Just as it looked as if Sister Sledge were going to slide into obscurity, rising disco producers Nile Rodgers and Bernard Edwards – the brains behind disco band Chic – signed up to produce the girls’ next LP, ‘We Are Family.’ It was a game-changer, of course, for Sister Sledge, and catapulted them into the music mainstream. Forty-one years down the line, the album still sounds spectacular. But the girls’ next album, 1980’s ‘Love Somebody Today,’ also helmed by Rodgers-Edwards, didn’t have the same impact, arguably falling victim to the growing ‘Disco Sucks’ movement. But as this box set reveals, it was an excellent collection packed with good songs, ranging from the bubbling funk of ‘Reach Your Peak,’ and jazzily soulful ‘Let’s Go On Vacation,’ to the driving ‘Pretty Baby,’ propelled by Nile Rodgers’ scything rhythm guitar.

1981’s ‘All American Girls’ LP saw them collaborate with rising producer, Narada Michael Walden. Ironically, its first single, the dancefloor-friendly title track co-written by the late Allee Willis, proved to be a bigger hit than the singles culled from ‘Love Somebody Today.’  Another highlight from the album was the ballad, ‘Next Time You’ll Know.’

Despite a fruitful liaison with Walden, the sisters elected to produce themselves on their next LP, 1982’s ‘The Sisters,’ which included a reworking of Mary Wells’ Smokey Robinson-penned Motown hit, ‘My Guy.’ Interestingly, the girls also recorded a song called ‘All The Man That I Need,’ which Whitney Houston would transform into a global hit in 1989.

Their follow-up LP, 1983’s ‘Bet Cha Say That To All The Girls’ put Sister Sledge in the studio with keyboard whiz George Duke, whose production style at that time relied on synths and drum machines, giving the girls an ultra-contemporary R&B sound. From it, ‘B.Y.O.B. (Bring Your Own Baby)’  was a Top 30 US R&B hit. Al Jarreau contributed a jazzy rap on the album’s title track, which is a horn-laden dance groove in the style of Michael Jackson’s ‘Thriller’ opener, ‘Wanna Be Starting Something.’

1985’s ‘When The Boys Meet The Girls’ LP put Sister Sledge back in the studio with Nile Rodgers, minus Bernard Edwards. Sonically, though, the album was pop-oriented and very different from their disco style of the late ’70s. It didn’t make a significant commercial impact in the group’s native USA but the single, ‘Frankie,’ was a surprise UK No. 1, spending a month at the summit of the British hit parade. Other highlights include ‘Dancing On The Jagged Edge,’ also a single.

The final disc in this collection is a rewarding listen for fans of Sister Sledge’s disco period. It contains ten remixes, including a Tom Moulton-tweaked ‘Mama Never Told Me’ and extended club mixes of ‘Lost In Music’ – the ace 1984 revamp by Nile Rodgers – ‘We Are Family, ‘ Thinking Of You’ and ‘He’s The Greatest Dancer.’