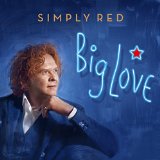 Simply Red are Brit music institution and though Mick Hucknall has tried to put the band to bed, he’s found the job impossible. Back in 2008 he announced Simply Red were finished and he released a Bobby Bland tribute LP under his own name. Then in 2012 he issued an odd ‘American Soul’ set – again under his own moniker. Both were reasonably successful but Simply Red just won’t lie down… the fans won’t let them and I’m guessing that Mick himself feels more comfortable and secure in the band format – a format the he’s employed with incredible success for 30 years! Yes, hard to believe it, but Simply Red are currently celebrating their 30th anniversary. They’re lining up a major tour and here’s the album to go with the tour and to celebrate that 30th landmark.

And you know, on this all-original song, 12 track album Mr H. really does sound “comfortable”… really “at home”, if you would. The reason? Well, I’m guessing that young Mick has finally decided what kind of band Simply Red are. He’s realised that he can’t out-soul the real soul men (the Bland album proved that), so let’s go with the next best thing … blue-eyed soul. Absolutely nothing wrong with the genre and when delivered well it can be as soul satisfying as the real thing and here Hucknall and co deliver a stunning blue-eyed soul album that’s right up there with any of their earlier classic sets.

Highlights abound, but anyone with an ear for a good tune and a passionate performance will keep going back to the LP’s title cut. ‘Big Love’, a gentle ballad, is simply superb and underlines why Simply Red have survived for 30 years. The tune has all the elements that made the band’s best so memorable and as a little bonus they channel that magical Bacharach muted horn sound in the instrumental break.

Elsewhere ‘Daydreaming’ has a touch of Philly soul about it while the bold ‘The Ghost Of Love’ has a flavour of Barry White to its swirling strings. For variety, ‘The Old Man And His Beer’ is whimsical; ‘Dad’ is more reflective while tunes like ‘Shine On’ and ‘Tight Tones’ are polite dancers in the manner of ‘Fairground’ and if you want another string-laced ballad try ‘Love Gave Me More’, but dip in anywhere here and if you like your soul with a blue-eyed tinge, you won’t be disappointed.