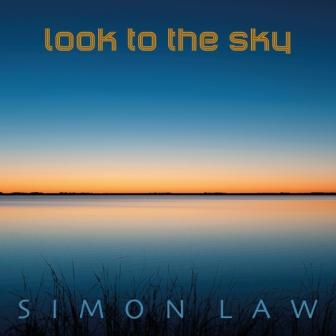 Back in March the soul world was treated to a lovely, frothy spring vibe of a tune called ‘Morning Love’. The cut was credited to “Simon Law featuring Caron Wheeler”. The savvy soul crowd recognized Caron right away…. one of the signature voices of Soul II Soul. But Simon Law? Well some knew but others quickly discovered that Simon was also a key member of the Jazzie B collective. The ex head chorister at Hereford Cathedral, played keys with Soul II Soul and co-wrote their two Grammy-winning songs ‘Back To Life (However Do You Want Me)’ and ‘African Dance’. He worked on all their albums except one, producing and co-writing many of their UK hit singles and he still performs regularly with the band.

Now Simon thinks the time is right to release his own solo album but to call it a solo effort is not entirely accurate. Mr L has called in old friends and some-time collaborators to help him deliver the music that’s been spinning around his head for some time. So on ‘Look To The Sky’ (the title suggests Simon’s belief that the sky is an endless source of creativity) you can enjoy the talents of people like the aforementioned Caron Wheeler, Maxi Priest, Chante Moore, Lain Gray (ex Nu Colours), Simon’s partner Jen Schaffer and someone called Jazzie B!

Indeed its Jazzie’s resplendent tones that get the long player started. He brings his distinct gravitas to the album’s title cut and you’d be forgiven for thinking that you’d stumbled across a long lost Soul II Soul artefact. Given Simon’s CV it’s not surprising that some of ‘Look To The Sky’ is redolent of Soul II Soul. Simon readily admits that when he makes music the Soul II Soul vibe is always there but as the 16 tracks of ‘Look To The Sky’ unwind you’ll discover that there’s much, much more here than a Soul II Soul pastiche.

For starters there’s some proper Caribbean vibes…. hardly surprising when you learn that Simon spent four years of his childhood on Trinidad. So if the sounds of the islands are your thing then sit back and enjoy the cool of ‘Sunshine Girl’ and ‘When You Love Somebody’ – both vocalised by Maxi Priest.

The biggest departure from the classic Soul II Soul sound comes right at the end of the album in a sequence of five songs that begins with ‘Your Light’ – that if we had to pigeon hole, we’d say was smooth jazz with a hard edge. Then there’s the semi-acoustic, almost country-fied ‘Precious Child’ – a beautiful plea for love and mindfulness sung by Lain Gray. That’s followed by ‘My Heart Is Ready’ (vocal from Joanna Law) and ‘She Walks At Dawn’ – ambient and ethereal, both. Then the lengthy closing track… ‘Heart Of God’. Like much of the album it’s a reflection of Simon’s spiritually (he’s a great respecter of the teachings of the Taizé community) and I defy you to categorise it.

Therein lies a problem. Music writers, fans and collectors love to categorizes and first reaction with Simon Law’s ‘Look To The Sky ‘would be to say here’s a Soul II Soul spin off: it’s not… this is a Simon Laws album with its own special sound and message.

Look out for an in-depth interview with Simon Laws here at SJF very soon.