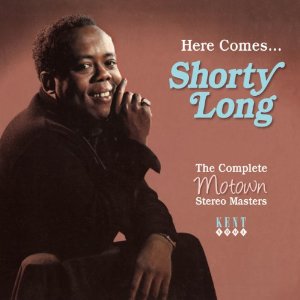 Ace/Kent’s latest dip into the Motown archive unearths the two albums made for the label by Shorty Long. Frederick Earl Long (his diminutive stature gave him the “Shorty” nickname), like a number of other artists, came into the Gordy fold via a connection with Harvey Fuqua. Ex-Moonglow Fuqua had signed Long to his own Tri-Phi label and in 1963 when Fuqua threw in his lot with Gordy he took his artists with him. Working first with Mickey Stevenson, it soon became obvious that Long’s down home, old school soul style didn’t quite fit the Motown template and the claim to be “the sound of young America”. Nevertheless, Gordy liked what Shorty could offer, so he instigated a new imprint, Soul, to accommodate his sound and the gutsier flavour of Junior Walker (another ex Tri-Phi artist).

Soul and Shorty hit pay dirt straight away when the tough and bluesy ‘Devil With The Blue Dress’ hit the R&B top 30. A clutch of hits followed – notably ‘Function AT The Junction’ and ‘Here Comes The Judge’ – a tweak on the Pigmeat Markham song that had been inspired by a catch phrase on the hugely popular 60s TV show ‘Rowan and Martin’s Laugh In’. On the back of those hits, in 1968, Motown released Long’s first LP – named for that judge song. Though the hits then dried up Motown kept recording Long often allowing him to produce his own sessions. Future plans however came to a halt when , on 29 June 1969, Shorty was killed in a freak fishing accident on the Detroit River. He was just 29. Motown, like all other record labels would have done, decided to continue releasing his work and a couple of singles and a second LP- ‘The Prime Of Shorty Long’ were soon out there on the racks.

In brief, then, that’s the story of Shorty Long…and despite his stature amongst Motown collectors his catalogue has long been neglected by the reissue labels and, indeed, Universal itself – the custodian of the Motown vault. Here though- to help redress matters – Ace records via their Kent imprint have coupled Shorty’s two LPs and adding two bonus cuts you get everything in stereo that was issued on him.

The set’s first LP is built around the aforementioned hits along with covers of stuff like the Jayhawks’ ‘Stranded In The Jungle’ and Tina Turner’s ‘People Sure Act Funny’. Worth checking too is a great ‘Don’t Mess With My Weekend’ –a rough cut Motown gem. The second, posthumous album included more covers like Fats Domino’s ‘I’m Walking’, the old chestnut ‘Memories Are Made Of This’ and a take on Procul Harum’s ‘Whiter Shade Of Pale’ – Long’s last single. Then, from the Motown catalogue there’s a great version of ‘When You Are Available’ – a song most associated with the Four Tops. The CD’s included bonus cuts are stereo mixes of the singles ‘Mobile Lil The Dancing Witch’ and ‘Chantilly Lace’ – both previously unissued. Hopefully the collection will go some way to fix a place in the soul firmament for Shorty Long and, maybe too, prove to the gainsayers that Motown wasn’t all easy on the ear, pop soul aimed at young America…. when they turned their attention to it, the Motown crew could do “proper” soul music too. Here’s the proof!