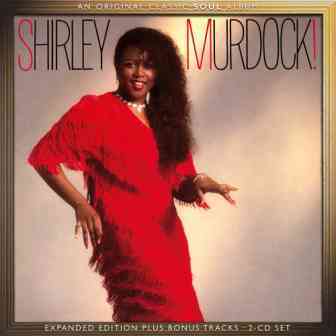 Like many soul singers, Toledo-born Shirley Murdock began her musical apprenticeship in the Church. And it was while she was working with the End Of Time Reveal Evangelic Crusade Choir that she was “discovered” by Roger Troutman who enlisted her services for his Zapp conglomerate. At first Shirley didn’t even know who Troutman or Zapp were but she soon discovered they were on their way to “next big thing” status” via their use of the talk box and all its spaced out connotations. So, despite some reservations and after encouragement from keyboardist Dale DeGroat (who would become Shirley’s husband) she signed up to the Zapp circus. Shirley featured on Roger’s ‘Cut It Out’ and ‘Computer Love’ and before too long she had her own deal with Elektra Records.

Hit singles came in the shape of ’86’s ‘No More’ and ‘As We Lay’ and before long there was the obligatory album. The eponymous 9 tracker went gold, yet despite that success it’s been out of print for some time. To oblige, David Nathan’s SoulMusic Records have just reissued it with (as is the modern way) the addition of all kinds of extras and bonuses.

The original album is very much a time piece but ‘As We Lay’ can still bring out the goose bumps. I’m guessing it’s the plethora of bonuses that will attract the collectors to this double CD. They come in the form of eight bonus cuts – that include five single edits; ‘Computer Love’ is there!

The second CD in the pack offers eleven tracks – various mixes of the original LP tracks and a big, extended version of ‘Computer Love’.

Interestingly for a church-reared girl, much of the material is risqué but through it all Shirley kept her faith and after the heady Troutman/Zapp days she returned to gospel and is still recording in that genre.