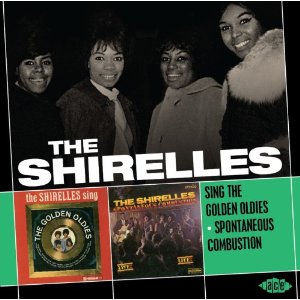 Over the last year or so Ace Records have been splendidly reissuing all the Shirelles’ albums which surely underline their importance – not just in the history of soul but in the development of pop. This twofer is the last in the series and pairs 1964’s ‘Sing The Golden Oldies’ with ’67’s almost live set ‘Spontaneous Combustion’. The former is a collection of covers that the girls recorded at Scepter between 1960 and 1964 and includes versions of Little Anthony’s ‘Tears On My Pillow’, the Willow’s ‘Church Bells’, Bruce Channel’s ‘Hey Baby’ and Gene McDaniels’ ‘100 Pounds Of Clay’. We described the latter set as “almost live” because two of the cuts (‘A Last Minute Miracle’ and ‘No Doubt About It’) were studio recordings doctored to sound as if they were live. Those apart, the rest of the set gives the flavour of a Shirelles’ live show… and all contemporary accounts testify that they really did “make show”. Nice to hear them singing’ ‘Baby It’s You’ and ‘Boys’ – Shirelle originals, of course … but given new significance when covered by the Beatles , and in a kind of return compliment to the British beat boys, the ladies offer their take on the Stones’ ‘Satisfaction’. By their own high standard both albums were hardly earth-shattering but as attribute to the first of the great girl groups the release is essential.