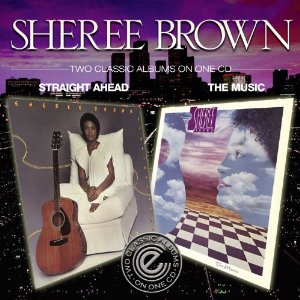 Los Angeles’ Sheree Brown is best known for her song ‘Got To Get Away’. Since its 1982 release it’s been a big favourite on the rare groove scene. The song originally featured on Sheree’s album, ‘The Music’ – one of two LPs she recorded for Capitol. The other was 1981’s ‘Straight Ahead’ and both have just won reissue on this lovely Expansion “twofer”. Sheree began her music career aspiring to be a jazz guitarist (in the style of her hero, Joe Pass) but a friendship with Patrice Rushen brought her squarely into the LA soul community where she found work with people like Jim Gilstrap and Syreeta. Those links brought her to the attention of Capitol who put her with producer Richard Rudolph for her debut set – ‘Straight Ahead’. The ten songs that made up the album are all Brown originals and with the cream of the LA session scene on hand it’s a lush and slick affair… sophisticated 80s soul if you would , and with Rudolph at the controls, hardly surprising that there’s flavours of Minnie Riperton about some of the cuts – notably ‘Passing Thing’. The most interesting track, however, is the doleful ballad ‘You Are Beautiful’.

For her second Capitol set, ‘The Music’, Sheree shared production credits with Andre Fischer and Alexander Thomas and in places there’s more punch to the music – try ‘Love Only Knows’. Clearly, ‘Got To Get Away’ was always the catchiest cut though ‘On My Way Home’ is hugely attractive too and features one of those heart-tugging harmonica cameos from Stevie Wonder.

After leaving Capitol, Sheree continued to work and became an in-demand writer. Zhane’s ‘Groove Thang’ is one of her biggest achievements. She’s recently been back in the studio too, working on new material. Indeed her latest recoding ‘Just A Simple Love’ is included here as a bonus. It’s a lovely Latin shuffle with a delightful melody and a vocal that betrays the lady’s years of experience. It’s a fitting end to a great reissue.