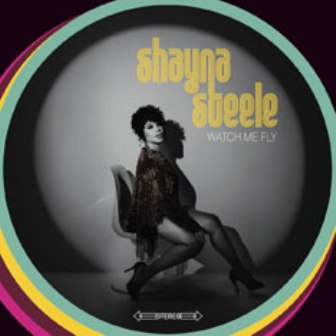 The daughter of a military family, Shayna Steele has led something of an itinerant existence. Born in California, she’s lived in (amongst other places) Germany, Oklahoma, Missouri and Mississippi but now resides in New York where she’s a valuable and valued member of that city’s vibrant music coterie. Her credits include work with Snarky Puppy, Moby and Bette Midler and those experiences along with her varied addresses go a long way to explaining why the music on her 2015 album ‘Rise’ was so eclectic!

Well, it’s taken a while but Ms S now returns with a new album and the 10 cuts that make up ‘Watch Me Fly’ offer a menu as varied as ‘Rise’. I mean there aren’t too many modern soul long players where, alongside the originals, you can hear songs first recorded by people like Little Milton, Michael Jackson, Big Mama Thornton and dear Doris Day! The Doris Day cover is the ‘Calamity Jane’ classic ‘Secret Love’ and this new light jazzy arrangement quite transforms it. ‘That’s What Love Will Make You Do’ is the Milton Campbell song and here its’ given a rocky makeover while on Thornton’s ‘Life Goes On’, Shayna stays down in Bluesville. MJ’s ‘Baby Be Mine’ is maybe more interesting … a hybrid of military marching and bumpy R&B grooves!

Amongst the originals, ‘Be’ is a fierce, proud opening cut… “so many things I wanna be… I’m gonna make my mark”. While the closing ‘Home’ shows that Ms S can do introspective too. In between plenty of rock-tinged serous soul … intriguing, interesting and, yes, eclectic!