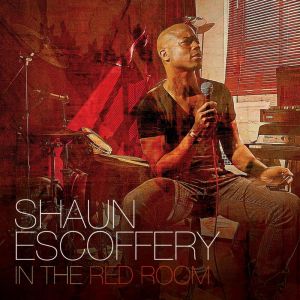 Shaun Escoffery…. now there a blast from the recent past! Was it as far back as 2001 that the soulful Londoner broke through with ‘Space Rider’? Then there was ‘Days Like This’, of course, but despite underground success – via work with DJ Spinna and people like Koop and Mark De Clive-Lowe, Shaun’s career seemed to stall and the covers album, ‘Move Into Soul’ didn’t change things too dramatically. Disillusioned maybe, the scion of a celebrated London musical family, found work in stage musicals – notably ‘Parade’ for which he was nominated for an Olivier Award. Shaun’s also enjoyed a long run in ‘The Lion King’, but soul was always calling and for the last two years he’s been working on this new album with producer Gil Cang, whose previous CV includes work with a certain Michael Jackson!

As a “comeback” album ‘In The Red Room’ is totally satisfactory and, if anything, Shaun’s pleading, frail falsetto has acquired more depth and a maturity that really shines through on the track, ‘Perfect Love Affair’. Don’t really know why but its complexity reminds me of Marvin Gaye circa ‘I Want You’ and that’s not a bad recommendation is it?

Another highlight is the simpler, stark ‘Nobody Knows’. It features a chinking guitar figure that takes us back to the 60s but the overall vibe is the one that Amy Winehouse channelled – totally contemporary with a big nod to soul’s Golden Age. Elsewhere ‘Crazy’ is an interesting semi-spoken piece; ‘You’ is a dramatic ballad; and ‘By Your Side’ is fronted by an old school churchified piano.

The biggest and brightest tune is ‘Get Over’ which really allows Shaun to stretch those vocals. For the rest, well expect plenty of soul-flecked pop though more intriguing is ‘Time’, a short experimental item with spaced-out vocal exhortations. More a sketch than a song, I’d have liked to have seen this one developed further.

Shaun is currently planning live shows in support of the album and watch out for a special video of the album’s opener, ‘Nature’s Call’. The promo film has been shot by Shaun’s log-time pal, Idris Elba and it’s sure to get lots of attention and rightly so. Great to have you back, Shaun.