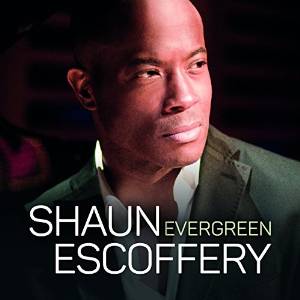 A couple of years back Shaun Escoffery released ‘In The Red Room’. It was warmly received and many perceived it as Shaun’s “comeback” album. In some ways it was. The then young Londoner broke through back in 2001 with stuff like ‘Space Rider’ and ‘Days Like This’ and though both became club favourites, Shaun’s career appeared to stall. What he would tell you though is that he simply changed direction, finding work in London’s thriving West End musical scene. Indeed for his role in ‘Parade’ he was nominated for a prestigious Oliver Award.

But soul was always in Shaun’s blood and with ‘In the Red Room’ that fact was re-established. Those who’d known of Mr E from his earlier work noted that his very special voice had acquired more depth and maturity and with one cut, ‘Perfect Love Affair’, he showed that once again he was a real contender!

‘In The Red Room’ was produced by Gil Gang, whose previous CV includes work with a certain Michael Jackson, and for this new 13 tracker he’s at the controls once again; so no surprise to learn that the overall soundscape is much the same. That’s to say classy, contemporary soul with a few surprises and curved balls to keep the interest levels high.

By now you may well be familiar with the album’s lead single ‘When The Love Is Gone’. It’s been a Radio 2 Record of the Week and had plenty of spins elsewhere. Easy to hear why. It’s a big production with a catchy hook that’s annoyingly familiar but for the life of me I can’t pin it down. That’s possibly because Shaun’s faultless soul vocal is the real focus of the track. ‘Love Shine Down’ is the album’s second single and, wisely, it offers a different flavour. This one’s a ballad that betrays Shaun’s gospel roots.

Again, it’s radio friendly but for my money it’s not the best ballad on the long player. That accolade goes to the lovely, lovely ‘Give Me Love’. This is a proper, soul tune! Shaun’s frail falsetto has never sounded better, and, like a slowed down ‘Soulful Strut’, it’s just gorgeous. Miss it at your peril!

Elsewhere, the other big focuses are the duets. First up there’s ‘Evergreen’ – a collaboration with Joss Stone. It’s not the Barbara Streisand song, rather a solid, head nodder and there’s clear chemistry between Shaun and Joss. Then we have the cover of the Eurhythmics’ ‘Here Comes That Rainy Day’. Here Shaun’s joined by Andreya Triana and they work well over a largely acoustic arrangement. Sadly I didn’t like the gloomy song the first time around and this new version doesn’t make me like it any more!

The good news, though, is that there’s plenty of stuff on ‘Evergreen’ to dispel the melancholia of that one. Above all there’s the lovely ‘Give Me Love’.