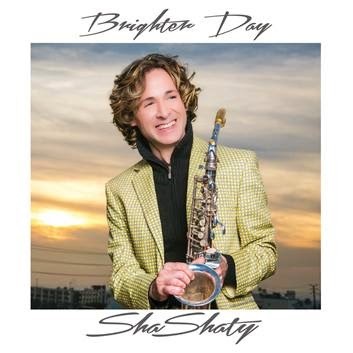 ShaShaty is an American smooth jazz sax man and ‘Brighter Day’ is his sixth album as leader. Co-produced by guitarist Steve Oliver, the 11 tracker is the first album on which all the tunes are his own and those who crave the golden days of smooth jazz could do worse than investigate the album.

Both tone and approach are set from the go with the bright, breezy, bassy opener, ‘Dream Ride’. Sha gets his tenor to ride a classic soul groove – the pity is he didn’t add a vocal. The album’s title track offers something similar though the tune’s not quite as focused. ‘Let’s Go’ is another up-tempo item and with its chanted vocal it’s as about as close as smooth jazz gets to funk.

The album boasts plenty of ballads too – but sadly things like ‘My Heart Yours’, ‘August’ and ‘I’m Always Near’ stray too near the middle of the road to be considered soulful…. however, there are plenty of Kenny G fans out there!

The more interesting cuts are the one featuring Taiwanese singer Usay Chu. She graces two tunes – ‘Song Of Hope’ and ‘A Million Miles’. To call them “songs” would be wrong. They’re actually billed as “wordless vocalizations” and they bring an ethereal, other-worldy quality to the album. That exoticism is extended on ‘Mumbai’ – with sitars (synthesized, I think) and atmospherics, it has the flavour of a travelogue soundtrack… but that was the idea, I guess.