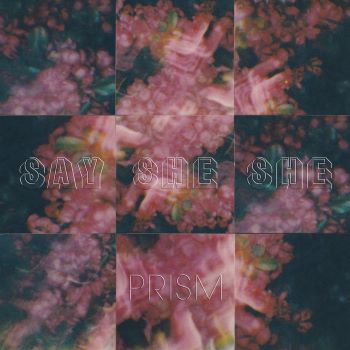 For the past several months we’ve been tracking the progress of a quirky band, SAY SHE SHE. We learned that he oddly named (more of that later) Brooklyn band is an 8 piece led by three female vocalists – Piya Malik,  Nya Gazelle Brown and Sabrina Cunningham all seasoned music biz veterans who harmonise beautifully, by the way. We enjoyed the singles ‘Forget Me Nots’ (an electro,  wah wah-fuelled outing), ‘Blow My Mind’ (another hybrid sound) and more latterly, ‘Norma’ – another intriguing left field tune. . Their people tell us that the song was “an urgent call to action to support the  protection of women’s rights and preserving the right to choose.”  Heavy stuff!

Say She She are about to release their debut album (out 23rd September) and on the strength of the three singles,  we were expecting  an LP’s worth of intrigue and quirkiness. However, it’s not really like that at all and, interestingly, we think, those three left field singles aren’t included. (Maybe to give the album a wider appeal?)

‘Prism’ is a very concise poppy 8 tracker with a soundscape that veers between sweet ballads and pop-flavoured  disco lite – indeed one of the tracks, ‘Pink Roses’, sounds like an old Bananarama dance track! The most soulful cuts are the opener (the album’s title track) – clean and crisp with lovely harmonies (think a 21st century Supremes) and the catchy ‘Fortune Teller’. ‘Apple Of My’ is a meandering ballad while ‘Don’t Wait’ offers a measure of balladic appeal and a lovely sax solo; the tune’s appeal grows with repeated plays. It’s a very good pop/soul track.

So, yes, if you know them, don’t judge this album by Say She She’s  first three singles. For sure they were quirky, odd even. The ‘Prism’ album is much more straightforward. The better for that? Make up your own minds via your own investigation. Oh, and that name…. Say She She, we’re reliably informed,  is a tribute to their heroes, Chic… C’est chi-chi!: It’s Chic!”… now you know!

Tags: Say She She