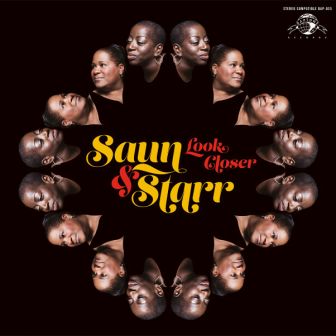 ‘Look Closer’ by Saun & Starr is currently taking the soul world by storm. Glowing reviews and heavy radio rotation of album tracks are conspiring to make the tasty 11 tracker a strong contender for proper new soul album of the year…. and here @ SOULJAZZANDFUNK we’re proud to say we were the first British media to draw attention to Saun & Starr – a “new/old” soul duo! Let’s explain…. Saun & Starr are indeed a new band and ‘Look Closer’ is their debut long player. However, the two girls, Starr Duncan-Lowe and Saundra Williams, are soul scene veterans. For starters, for some time now, the Bronx-born duo have been the background vocalists for Sharon Jones – dubbed the Dapettes, the pair have become an integral part of Sharon’s incendiary shows and recordings. Long before working with Sharon the pair worked (separately) in gospel choirs and in the 1990s they joined together (with Sharon) in a wedding band before going their separate ways again and working and recording in a variety of guises. Indeed discerning soul fans will have fond memories of Saundra’s solo 1999 long player, ‘Bless The Day’.

Fast forward now to their Dapette days. Long-impressed with their abilities, Daptone’s head boy, Gabe Roth decided that the girls deserved their own album and he put the label’s resources at their disposal… and the result is this magnificent ‘Look Closer’ album.

Reviewing the album, it’s hard to know where to start… there’s so much soul excellence here. Sound-wise, the Daptone analogue recording and production gives matters an organic authenticity. The songs are all proper songs – not just sketches or basic grooves (what’s wrong with tunes with a beginning a middle and an end?) and vocally the girls are in top form throughout. Betraying their gospel roots, they don’t resort to gimmicks or histrionics… they simply do what they know they do best i.e. sing with passion and conviction.

All that comes to perfection on our favourite track – ‘Dear Mr Teddy’. This one’s a great impassioned 60s throwback with the flavour of that era’s greats (Maxine Brown, Barbara Acklin, Baby Washington, Jackie Ross etc about it). Elsewhere the LP’s title tune is a great mid-tempo item laced with insistent brass; ‘Hot Shot’ and ‘Blah Blah Blah’ are great dancers that would sit perfectly in any Northern DJ’s set; ‘Sunshine’ and ‘Your Face Before My Eyes’ are looser and funky; while ‘If Only’ is a bluesy ballad equalled in its intensity by the passion of the Southern flavoured slowies, ‘Another Love Like Mine’ and ‘In The Night’. Put all that together and you have one great contemporary soul album that makes you realise why you got mixed up in this crazy old soul world in the first place. The album, by the way, is officially released on May 18th. In the meantime watch out for our exclusive interview with Saun and Starr…. coming atcha very soon.