SAM RUCKER: Tell You Something (Favor) 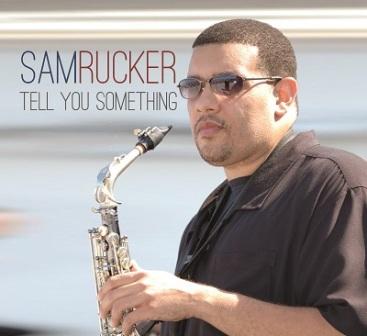 Saxophonist Sam Rucker began his musical odyssey as a hip-hop producer but the accessible appeal of smooth, soul-based jazz soon took hold and in 2011 he debuted with ‘Heat From The Heavens’ on which he successfully blended his hip-hop background with classic soul and his inspired sax jazz licks. For this album, his second, Sam’s drafted in some top names to help him deliver his formula… none bigger than Norman Connors. The soul/jazz veteran takes the producer’s chair for a remake of his classic ‘You Are My Starship’. Sam’s mellifluous alto takes the vocal part and it’s smooth and then some… a delight enhanced by two giants….. Bobby Lyle who adds some sweet piano and Tom Browne whose distinctive horn brings the track to a great conclusion. Connors and Lyle are there on the albums other big moment –a cover of the Isleys’ ‘Footsteps In The Dark’. This is smooth jazz as it was in its heyday…. and you want a bonus? Well how about the great Alyson Williams adding a passioned vocal? Nuff said! The album’s other cover is a take on Maze’s ‘Before I Let Go’. Once again Connors is at the helm with Ms Williams (sadly not a lot of her) and Mr Lyle in tow.

The remaining nine tracks are all Rucker originals and stuff like the LP’s title cut and ‘A Million Ways’ (vocal from Sheila Johnson) have a drive and urgency that’s been missing from smooth jazz in recent years. Then there’s ‘Ain’t Nothing like It’ with an fiery vocal from Tolbert L’bert – while ‘Brighter Day’, ‘Be True 2 Who U R’ and ‘Love’s Melody’ show that Sam can play sensitive too.

Sam Rucker’s ‘Tell You Something’ gets an official release on June 3rd…. in the meantime find out more @ www.samrucker.com