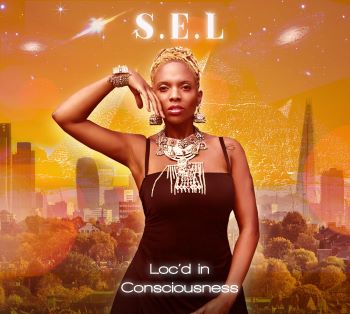 S.E.L. is the working name of North London soul singer EMMA LOUISE HARRIS/BUCKNOR (Soulful Emma Louise…geddit!) and if you’ve not heard about her – well where you been? Her first record was 2010’s ‘Necessary’ but Emma broke out big time in 2016 with her lovely ‘Elevation’ which was followed by soul chart hit after chart hit – the biggest  being  ‘Flowered Tears’ while her most recent single was her collaboration with Bryan Chambers, ‘Falling’.

Emma’s been promising us an album for some time and it’s now amongst us. The 10 tracker that is a ‘Loc’d In Consciousness’ was heralded by the single ‘Melodic Harmony’- a tune that was brimming with goodtime Brit soul, optimism and hope. Little wonder it was a UK soul chart rider and, the great news is that the parent album offers plenty more of the same.

However, we need to say that five of the ten cuts have been out as singles. They are ‘You Gotta Be’ (Emma’s cover of De’sree’s pop hit which she released as a single in 2017), 2017’s ‘Flowered Tears, ‘Sweetest Pain’ (a 2018 single – a cover of the Dexter Wansel/Jean Carn  Philly classic), last year’s ‘Falling’ and, of course, ‘Melodic Harmony’. Then there’s a new mix (courtesy of Michele Chiavarini) of  the break-through ‘Elevation’ . Some might say that this duplication short changes the real  fans who’ll probably have all the tunes already. Others might argue that it’s great to have all of S.E.L.’s big moments in one place and they certainly still sound good – totally fresh and contemporary.

So, what about the new tracks? First up is ‘Girl’ a bright, breezy cut with a whiff of the Brand New Heavies about it. Then there’s the ironically titled ‘Brand New’ – outstanding Brit soul by any standards. Third newbie is ‘Be Your Sun’ which again shows the influence of the Brand New Heavies or even Incognito. The final new cut is ‘My Point Of View’ which is the LP’s only down-tempo moment, proving that Emma can do sensitive beautifully. Clever production here too… is that a harpsichord?

No argument, ‘Loc’d In Consciousness’ is a quality debut album… just the right length with no irritating filler. And what about the title (I hear you saying!) . Emma says : “Loc’d’…my hair is in locs and I consider myself to be conscious of life and connected to a higher power. I have put my heart and soul into this body of work. What to expect?… mmmmmm Authentic UK Soul” Can’t argue with that!