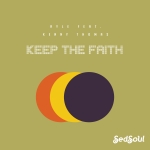 Modern soul connoisseurs will know exactly who “Ryle” is… yep, Frank is one half of the Cool Million team (the other half is Rob Hardt) and the “Jefferson Keyes” of the album title? Well, we’e told that he’s from an obscure 70s TV series. Keyes was played by jobbing actor James Farentino and guess what the series was called…. maybe not surprisingly it was called “Cool Million”! Anyway together Frank and Jefferson/James offer a lovely little nine track album which we’ve been promised since last December when Frank started trailing tracks from the LP.

The first taster was a wonderful slab of upbeat, optimistic soul called ‘Never Gonna Let You Go’. The vocal on the song comes from Danish singer Seest and the sound, the production, the beats, indeed the whole vibe embodied everything the soul community has come to know and love about Cool Million! That’s to say it was (indeed is) a wonderful recreation of the classic soul sounds of the late 70s/early 80s. Then came another superlative slab of modern/retro soul, ‘Keep The Faith’, featuring someone called Kenny Thomas!

Both tracks are highlights on the now finished album; though select any of the other cuts and you won’t be disappointed. Everything here is built from the same components … great beats, catchy melodies, polished production and committed vocals creating a kind of optimistic, upbeat soul that the mythical Jefferson Keyes of the album title would have been delighted to have strutted his stuff to!

Amongst the other great cuts are the bustling, busy ‘Busy Dreaming’ featuring Danish singer Greggers (this comes in two mixes), the funky, bassy ‘Lift Your Head Up’ with Sulene Fleming on vocals and the shimmering ‘Two Way Love Affair’ which has Fleming Fanoe at the mic. They (in fact everything on offer) carries the influence of the soul-funk and disco of the late 70’s and early 80’s … the era of our main man Jefferson Keyes.

Cool Million fans, by the way, need not panic. The duo are still very much in business. Frank Ryle has made this album as a sort of side project fuelled by his love of 70s and 80s vinyl (he’s a self-confesed vinyl addict!). Consequentkly the album has (like those old vinyl classics) just nine tracks, and while it’s available in the usual “modern” formats it will also be avialable in an 180 gram vinyl edition.