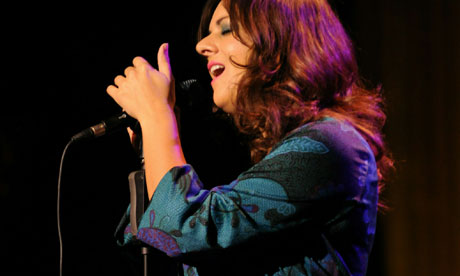 With three albums-worth of material under her belt, mellow-voiced Rumer has a larger repertoire to draw from than she did when I first saw her back in 2010. Then, of course, she was still a relatively unknown quantity but that soon changed with the phenomenal success of her debut LP, ‘Seasons Of My Soul.’ Five years on and Rumer, who now lives in the USA,  has a new band – a cohesive six-piece led from the keyboards by her able pianist/music director and soon to be husband, Rob Shirakbari – as well as a legion of devotees on both sides of the Atlantic. The passing of time and familiarity hasn’t dulled the lustre of her voice and it remains a thing of beauty: caressingly warm, honey-toned and tinged with a melancholy that betrays a tonal smidgeon of a certain Karen Carpenter. The music that Rumer makes is undeniably laid-back and soothing to the soul and anyone expecting pyrotechnics – vocal or otherwise – will be profoundly disappointed by the mellow vibes that characterise a Rumer concert. On stage for ninety minutes, the 35-year-old singer mostly focused on material from her latest LP, ‘Into Colour,’ with highlights coming in the shape of the infectious groover ‘Play Your Guitar’ and the wistful ‘Pizza & Pinball.’ The band got to go up several more gears with a energised take on Darryl Hall and John Oates’ ‘I Can’t Go For That.’ Mostly, though, the mood was luxuriously sedate.  While her second album, ‘Boys Don’t Cry’ – a covers album focusing on songs by male songwriters – didn’t chime with some listeners, it nevertheless contained some good music and from that set the singer delivered a faithful rendering  of Jimmy Webb’s wonderful ‘P.F. Sloan.’ Also included were songs from her stellar debut album  – ‘Slow’ and ‘Aretha’ were particularly striking – though for some reason the seductive and sensual ‘Come To Me High’ (arguably the album’s best track) was omitted. This minor gripe aside, Rumer proved here that she’s a captivating live performer whose beautiful voice will ensure that she’ll always have an audience for her music.