RUFUS AND CHAKA KHAN: ‘Live – Stompin’ At The Savoy’ (bbr) 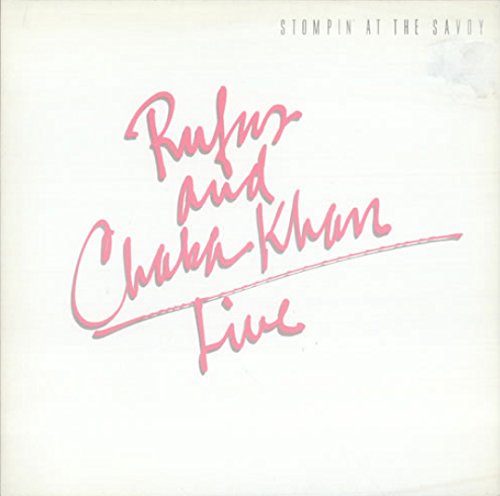 Despite being one of the best in-concert R&B albums of all time – in my opinion it’s right up there with James Brown’s classic ‘Live At The Apollo’ albums, Donny Hathaway’s ‘Live’  and Aretha Franklin’s ‘Amazing Grace’ – the double-album ‘Live – Stompin’ At The Savoy’ has never been accorded the attention it undoubtedly deserves. In fact, it hasn’t been reissued since the late ’80s when it appeared as a 2-CD set. Now, though, those super-soulful folks at bbr have licensed it from Warner Bros, wiped away the dust from the master tapes with a fine remastering job, and reissued it as a single CD 33 years after the album first hit the shops.

What can you say about Chaka and Rufus? They were an incendiary combination of a volcanic voice and an irresistible groove machine that lit up the US R&B charts in the 1970s. Chaka left the band in ’78 to begin a solo career that exploded spectacularly. There were a couple of reunions along the way (the studio albums ‘Masterjam’ and ‘Camouflage’) but in 1983 they reunited for this grand finale of a swansong. Augmented by a horn section, a percussionist and a bevy of backing vocalists to create a widescreen effect, the band and Chaka are on fire from the off and include combustible renditions of classic tunes from their back catalogue, including ‘Once You Get Started,’ ‘Sweet Thing,’ ‘Tell Me Something Good,’ and ‘I’m A Woman (I’m A Backbone).’ The synergy created by Chaka and Rufus is electrifying and is a perfect example of a band and singer merging as one in symbiotic harmony.

What made ‘Live – Stompin’ At The Savoy’ slightly anomalous was that it wasn’t all live – only three of the original LP’s four sides captured the band in concert. Side four found Rufus and Chaka in the studio for four cuts under the direction of producer Russ Titelman. Its lead song was the anthem-like ‘Ain’t Nobody,’ which was the first single from the album and became a massive global smash that is now regarded as an ’80s club classic. The album’s second single, the studio cut, ‘One Million Kisses,’ is very good but doesn’t quite reach the transcendent brilliance of ‘Ain’t Nobody.’ Originally a Jeffrey Osborne B-side, Chaka converts ‘One Million Kisses’ into a brilliant vehicle for her stratospheric vocals, especially on its repeated choruses. The uptempo ‘Try A Little Understanding’ is fairly routine by Rufus’ standards but that’s a quality that you couldn’t accuse the album’s final cut, ‘Don’t Go To Strangers,’ of – it’s a beautifully-realised jazz standard where Chaka matches her jaw-dropping technical virtuosity with heartfelt emotional gravitas. Listen out for Joe Sample’s limpid piano solo.

There are people who will probably buy this reissue just for ‘Ain’t Nobody,’ perhaps, and who could blame them? It is, after all, a soul/dance evergreen, and certainly, in the ears of the wider record buying public, Rufus’s admission ticket to pop immortality. For the purists, though, it’s what comes before that track on the album that really matters: an astonishing live performance that captures one of the ’70s best soul and funk bands at their apex. But it’s much more than a live album: it’s an important aural document that details Rufus & Chaka’s history in a vivid microcosm. Sadly, there’s no bonus material, but when an album’s as perfect as this, who cares?