RUBY TURNER; Women Hold Up Half The Sky (Cherry Pop) 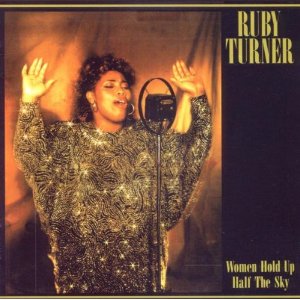 Ruby Turner’s become something of a benevolent musical national treasure – a position reinforced by her almost permanent role with the Jools Holland Band. Some people, therefore, might find it hard to believe that in the mid 80s she cut some fine and feisty, true soul LPs. To help us re-acquaint ourselves with her enormous talent, Cherry Pop (a subsidiary of Cherry Red) have reissued (for the first time on CD by the way) her 1986 Jive debut album ‘Women Hold Up Half The Sky’. Yes, there’s a generous helping of pop soul on it (the ultra-catchy ‘In My Life’ springs to mind) but plenty of blistering soul too – notably covers of ‘I’d Rather Go Blind’, Penn and Oldham’s ‘ A Woman Left Lonely’ and the Womacks’ ‘Hurting Inside’ along with a surprisingly heavy Jonathan Butler song ‘I’m In Love’. Of course you also get the catchy remake of the Staples’ ‘If You’re Ready (Come Go With Me)’ and a jaunty ‘Bye Baby’ which offers more than a nod to the lady’s Caribbean roots. The LP’s original 11 cuts are augmented with a quintet of bonus tracks including an extended version of ‘If You’re Ready’ and a lovely take on Smokey’s ‘Ooh Baby Baby’ from Ruby’s sadly neglected album of Motown covers – now there’s an album worth reissuing! In the meantime let’s be happy that this pleasing debut set is back on the shelves.