RUBY TURNER; All That I Am (RTR) 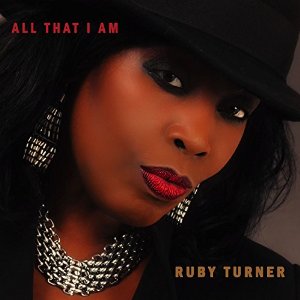 Though she may not relish the accolade, Ruby Turner has assumed the mantle of the elder stateswoman of UK soul. She has enjoyed a slew of hits and her albums were always chart riders. But the lady has ever been ready to diversify. She’s acted, done TV documentary work, mentored and judged on televised gospel contests; she’s also savvy enough to have run her own record label and in the last few years, of course, Ruby’s become a semi-permanent fixture in Jools Holland’s touring band, ensuring her profile remained prominent.

Now after a five year gap, Ms Turner has released this latest album – a 14 tracker that reflects the diversity manifest in her career. ‘All That I Am’ proffers all kinds of flavours but the most prominent is catchy pop/soul with a hint of AOR – the kind of music that sits easily on the playlist of Radio 2. ‘Hello Baby’, ‘Fire In My Heart’, ‘Move On’ and the lightly reggae-flavoured ‘Putting You First’ are good examples of what I mean. Pleasant and innocuous, Ruby, I’m sure, could knock stuff like this out in her sleep.

The better tracks occur when she challenges herself… and there’s no bigger challenge in soul than to try and cover the classic Southern soul cheating song ‘Dark End Of The Street’. It’s been recorded dozens of times and though Ruby will be first admit that her version pales alongside those of, say, James Carr and Aretha, Ruby and her team acquit themselves well and achieve just the right amount of ironic churchliness that the Penn/Moman classic demands. Yes, they get it right…. even down the country garnishes.

The album’s other big cover is a treatment of the Rodgers and Hart standard, ‘I Didn’t Know What Time It Was’. Wisely it’s kept simple – with just stark yet effective piano accompaniment courtesy of Reuben James.

Best of the original materials is the understated ‘Master Plan’ on which Ruby shows that she knows that with soul, it’s often what’s left out that’s more important than what’s crammed in. Of note too is the opening ‘Mighty Hard Time (A Prayer)’ on which the singer is proud to bare her gospel roots.