RUBY AND THE REVELATORS: Walk With Me (rubytiger.bandcamp) 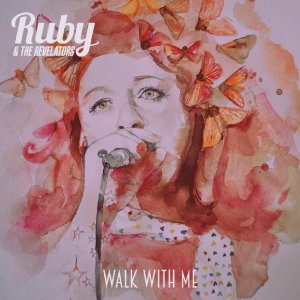 Ruby and the Revelators are a hard-gigging soul and blues band operating in and around South East England. They comprise Olivia Stevens (“Ruby”, of course), Louise Maggs (guitar), John Whale (bass), Fraser Wigg (keys) and Paco Munoz (drums). The band are currently promoting this, their debut album – a follow up to their 2014 ‘Vistas’ EP which climbed to no 2 in the indie blues chart – kept off the top spot by someone called Joe Bonamassa!

This new 10 tracker is named for the set’s closing track – a dramatic, piano-led blues that allows Olivia/Ruby to show off her vocal prowess. There are plenty more bluesy moments – but, take note, not traditional, 12 bar blues. So ‘Pity City’ is a rock-infused driving blues based number; ‘Cold, Cold Winter’ is a piano-led, late night lounge blues, while ‘Find Me A Man’ harks back to the juke joints of the 40s and 50s with barrel house styling. Elsewhere ‘Lingers’ is bassy and funky while the intriguing ‘Coal Into Gold’ is a lazy meander with a jazzy undertow.

From a soul perspective, album highlight (by a mile) is the lovely opener, ‘When I See You’ . With added brass, there’s something special about this one… might sound odd but if you like blue-eyed soulsters Robin McKelle and Paul Carrack you’ll love it! It’s a proper blue-eyed soul ear-worm and you can investigate it @ www.rubyandtherevelators.co.uk