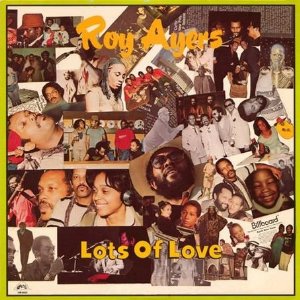 Following a supremely fertile tenure at Polydor – where in a prolific ten year period (1971-1981) he released almost twenty albums – vibraphone meister Roy Ayers started up his own label, Uno Melodic. ‘Lots Of Love’ was his only set for Uno Melodic, released in 1983 just prior to a new major label deal at Columbia (most of Uno Melodic’s other releases were acts that Ayers produced, like Eighties Ladies and Sylvia Striplin). Overlooked in Ayers’ huge canon, ‘Lots Of Love’ is a lost jazz-funk gem. Out of print for a long time on CD, it’s now been remastered by Universal Sound, an imprint of the UK–based Soul Jazz label and is available in a mini-box pack complete with collectable postcards. ‘Black Family,’ the opening cut, is a churning 9-minute groove and has a distinctive Afro-beat flavour, which shouldn’t be surprising given that the great Nigerian funkateer, Fela Kuti, co-wrote the song – interestingly, the song also boasts a rap, demonstrating that Ayers was tuning into and assimilating the lexicon of early hip-hop. Ayers is renowned for his hypnotic, vibes-led dance grooves, and here he doesn’t disappoint – ‘Everybody’ is an arresting slice of moody funk with a chanted chorus; ‘Fast Money’ is a driving dance cut that reflects the increasing presence of ’80s synth technology in Ayers’ work, while ‘Chicago’ with its insidious-sounding minor chord sequence, has an even darker feel that anticipates the Detroit house and techno sound of the late-’80s and beyond. With musical contributions from Brian Jackson, Lesette Wilson and Mtume, ‘Lots Of Love’ is a fine album that should be snapped up post-haste by jazz-funk aficionados.