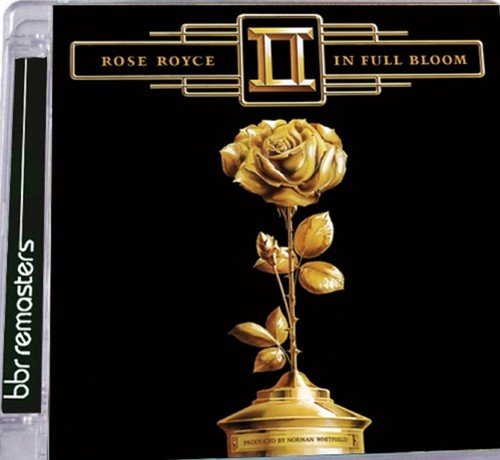 Recorded in 1976, this was supposed to be the album that uber-producer Norman Whitfield would use to introduce his latest protégés, Rose Royce, to the world via his own Warner-distributed Whitfield label. But as the informative liner notes to this reissue reveal, the same year the producer was approached to provide the soundtrack to a Joel Schumacher movie called ‘Car Wash’ and duly obliged – the bad news was that Rose Royce’s debut got shelved (albeit temporarily), but to compensate, Whitfield employed the group as his main performance vehicle in the movie. Thus it transpired that the first recordings released by Rose Royce turned up on a double soundtrack album via MCA. The movie’s title song was huge hit for the band, of course, and introduced them to a global audience so that by the time 1977 arrived when ‘In Full Bloom’ finally got released, there was already a hungry market for their music.

‘In Full Bloom’ continues where the ‘Car Wash’ soundtrack left off, blending sweetly soulful ballads with churning, wah-wah-heavy funk grooves. ‘Wishing On A Star’ – penned by Billie Calvin and inexplicably rejected by Barbra Streisand before it found its way to Rose Royce – is a fabulous opener whose key – and enduring appeal – is its simplicity and  melodic infectiousness. On this track and another fine ballad, ‘Oh Boy,’ singer Gwen Dickey (who was originally credited on the album using the pseudonym Rose Norwalt) illustrates what a uniquely soulful voice she possesses. She was also adept at leading a funky groove and bringing a sinuous sensuousness to disco cuts such as ‘Do Your Dance’ (you get the single edit and the full length version on this expanded reissue), ‘You Can’t Please Everybody,’ ‘Funk Factory’ and ‘It Makes You Feel Like Dancin’.’ Most of the material was written by Norman Whitfield who succeeds in making Rose Royce a more accessible, lighter, radio-friendly version of The Undisputed Truth, a cult vocal group that he produced at Motown (and then Whitfield) for many years with limited success.

Rose Royce released several more fine albums after this but never quite reached the same high peak of creativity again that was evident on ‘In Full Bloom,’ which along with the ‘Car Wash’ soundtrack, represents the group’s finest work. Bloomin’ lovely.