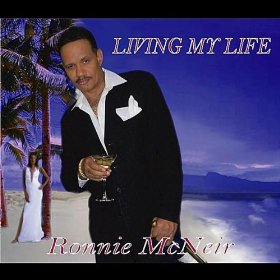 Perennial soul fave, Ronnie McNeir is now a permanent and valuable fixture in the Four Tops, but he still manages to pursue a successful solo career…. a career that began back in the heady days of the early70s. Then, proper soul fans became hooked on classics like ‘Wendy Is Gone’ and those fans have stuck with the man ever since and he’s rewarded them with some fine music as he keeps the “real soul” flag flying high. Over the years Ron’s music has been consistent and he’s one of the few old school artists still recording who you know won’t let you down… and here on his new 13 tracker he continues to deliver.

There are a number of cuts here that sweetly sum up the artistic essence of Ronnie Mac. Most obvious example is the lovely ‘Forever My Love’. It’s a swinging affair with a great melody, fine harmony work and those lovely jazzy changes that Ronnie specialises in… it’s finger clickin’ good. ‘Tell Me You’re Not Fooling’ is another great cut – little wonder that’s it’s quickly become a soul radio favourite. ‘Said I Do’ is another lazy, layered tune while the semi-autobiographical ‘Pontiac’ possesses a real insistence matched by ‘Keep Lovin’ Me’ – which features more of those special McNeir jazz chords.

The album also boasts a couple of cover versions. First there’s a languid look at Marvin’s ‘I Want You’. Always more of a groove than a proper song, here Ron gets it to move along quite beautifully. Then there’s a quirky take on the Impressions’ ‘Gypsy Woman’. It’s quite, quite different to the classic original (or any of the countless other covers I’ve heard) … which, I guess, is the point of tackling such a well known song. There’s also ‘I Just Want To Dance With You’ – which, though not a cover, owes something to Marvin’s ‘After The Dance’.

There’s one track that I’ve not quite made my mind up on; it’s the opener – ‘Don’t U Stop It’. It’s a sort of Caribbean style romp complete with good time rap from Malaya Milan. Let’s just say it’s different to anything Ronnie’s recorded before and more than made up for by the rest of the set… and repeated plays continue to reveal new highlights – like the broody ballad that is ‘Be With You’ and the poignant closer that is ‘Sweet Grandmother Of Mine’. It’ so easy with songs of that nature to fall into cloying, sentimental clichés, but Ronnie avoids them and creates a tune that recalls the best ballads of the Four Tops. He’s touring Europe with the band next year, but in the meantime be thankful he’s decided to keep his solo career going… “Mr Soul Consistency” delivers again!