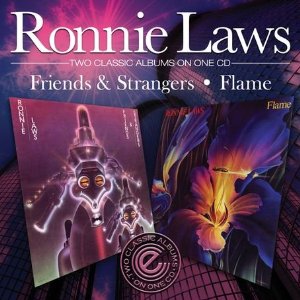 Texan sax man Ronnie Laws was there in the early days of Earth, Wind and Fire but in 1976 he struck out solo with United Artists/Blue Note. His debut album, ‘Pressure Sensitive’, yielded the classic ‘Always There’ which went on to not only be covered numerous times but to become a standard on the UK jazz-funk scene. So much so, in fact, that Laws has always been held in high esteem by the aficionados of that scene and indeed all soul people of a certain vintage; both groups will, therefore, be delighted with this new collaborative reissue from Expansion and Jazz FM. The album offers two of Ronnie’s early albums – 1977’s ‘Friends And Strangers’ and 78’s ‘Flame’ … and it’s a real time piece.

Both albums were mainly instrumental (over time Laws was to tackle more vocals) and the up-tempo cuts haven’t travelled down time particularly well. ‘Nuthin’ But Nuthin” is a good example. The bass line is typical of the time and the playing is wild and frantic while producer Wayne Henderson lets it run on too long. What saves it (and indeed saves some others) is Bobby Lyle’s sparkling keyboard work. It’s also particularly strong on ‘Life In Paradise’ – a lovely, mid-tempo item with Laws’ soprano having a David Sanborn feel about it. It’s one of the standouts on the ‘Friends And Strangers’ set – the other, of course, is the wonderful title cut which has all the feel of prime time EWF.

The ‘Flame’ album has lots of wild workouts too – but also some more intriguing outings – notably ‘Living Love’ and ‘Flame’ itself. The former features a wonderful, minimal ensemble vocal from a top team – Lovely Hardy, Dianne Reeves and Philip Bailey while at seven minutes plus, ‘Flame’ offers intricacy and intrigue. That said, the cut – indeed, all 16 tracks are great examples of what was happening in the golden age of jazz-funk; and if it’s that’s your bag, you’ll be delighted that both LPs are back in circulation again… and at a fraction of the cost of what original copies are currently fetching.