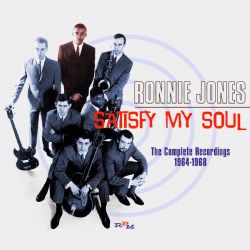 Some say that if you can remember the 60s you weren’t there! What a load of bollocks!!! I was there and I can remember every thrilling minute (well almost). Musically I can remember the first time I saw the Beatles at a Cavern lunch time session and more contextually I can remember the first time time I head real magic like the Miracles’ ‘Going to A Go-Go’, Major Lance’s ‘The Matador’ and Billy Stewart’s ‘I Do Love You’. In an era when visiting American (real) soul stars where thin on the ground in the UK I can remember thrilling to home grown soul bands like George Fame and the Blue Flames, The Fix, The Mike Cotton Sound and the Almost Blues. Better even, I can remember scintillating soul shows fronted by US soul men who’d relocated to the UK (either by choice or by military posting) …. people like Geno Washington, Jimmy James, Herbie Goins and Ronnie Jones…. the subject of this lovely 16 tracker on collectors’ label RPM.

Jones was born in Massachusetts in 1937 and whilst serving with Uncle Sam he was posted to the UK… specifically to the High Wycombe air base. Like many of his colleagues, leave time was often spent making the short journey to London and the jazz clubs of the capital…. legendary places like the Flamingo, The Scene, The Bag O’ Nails and the Crawdaddy. There the servicemen mingled with the mod and Afro-Caribbeans, enjoying the sounds of Chess, Stax, Okeh and Motown and a succession of UK performers like Alexis Korner. Air man Jones scored a temporary gig with Korner’s Blues Inc and made a name for himself before being drafted back to the USA.

In 1964, after demob, Jones was invited back to the UK by music biz entrepreneur Ronan O’Rahilly and asked to front a soul combo called the Night Timers. The new team became a big draw on the live scene but when Ronnie went on a nationwide package tour, the Night Timers defected to Herbie Goins so the singer was left to find a new band. He enlisted an outfit called The Blue Jays and also hired PP Arnold as backing vocalist. The liaison was short lived… the Blue Jays decided Ms Arnold was a better front person, so Ronnie was out and looking for more musicians. This time The Q Set answered the call and the sell-out gigs started again.

Through all these ups and downs Ronnie was constantly making records and everything he cut in the UK has been assembled on this new album. Cuts range from his debut (with Blues Inc)… a cover of ‘Night Time Is The Right Time’ through to his 1967 release … his version of Clyde McPhatter’s ‘Without Love (There Is Nothing)’. Indeed much of Ronnie’s recorded output consisted of soul covers and he makes good jobs of stuff like ‘Anyone Who Knows What Love Is’ and ‘I Need your Lovin’. Sadly none of Ronnie records charted and he eventually settled in Italy where he did at last enjoy success; indeed he’s still there, still recording and performing but I’m guessing that he rarely includes any of the 18 tunes here in his show. Sad maybe, but at least this collection offers some kind of tribute to a great Brit soul 60s hero.