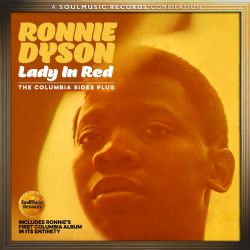 DC-born but Brooklyn-bred Ronnie Dyson enjoyed a moderately successful music career between the late 60s and early 80s. For much of that time he was signed to Columbia Records and SoulMusic Records here bring together the best of the fragile falsetto’s work for that label in order that we might reassess his achievements.

The album opens with one of the songs that will forever be associated with Dyson – ‘Aquarius’, from the musical ‘Hair’. Aged just 18, Ronnie landed a role in the show’s Broadway opening and his version of the song remains the defining one. His ‘Hair’ success won him roles in other shows – notably 1970’s ‘Salvation’ which was the source of another of his hits, ‘(If You Let Me Make Love To You Then) Why Can’t I Touch You’. In 1971 he hit the charts again with a cover of the Delfonics’ ‘When You Get Right Down To It’. Not surprisingly given that song’s provenance, Columbia then had Ronnie work with Philly’s Thom Bell and the pair scored with ‘One Man Band (Plays All Alone)’ and a cover of ‘Just Don’t Want To Be Lonely’.

All those songs are included here along with undemanding covers of songs like ‘Band Of Gold’, ‘Bridge Over Troubled Water’ and ‘Girl Don’t Come’ along with original numbers tailored to fit the singer’s unique feminine sound. Oddly one of his biggest Columbia hits, the Chuck Jackson-helmed ‘The More You Do It’ is omitted but there’ still enough to enjoy… that is if your tastes are at the poppier, blander end of the soul spectrum.

After Columbia, Ronnie Dyson cut two albums for the Atlantic imprint, Cotillion, before failing health took its toll. He died in 1990 at the ridiculously young age of 40. Much of the best of his legacy is on this 23 tracker and Northern fans will note that collection’s title comes from the song that won him some plaudits on that scene.