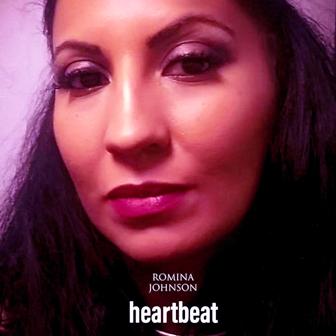 It was the back end of last year that ROMINA JOHNSON released a new single… ‘More’ … which we were told was from an “upcoming” album. Well in these tricky times, release schedules have gone by the board but at last that promised long player, ‘Heartbeat’ wins official, full release.

UK Soul fans will know all about Romina J. Born in Italy, but based in and working out of London she made her name as a top session singer and for a time worked with Odyssey. She has also, of course, carved her own niche as a solo performer with classic dance grooves like ‘Moving Too Fast’ and her modern soul anthem ‘Never Do’. The autumn single ‘More’ channelled a similar sound to her hits. That’s to say, it was a clean, crisp modern soul groove impeccably sung – but you’d expect nothing less from a singer of her experience.

The good news for lovers of that typically Brit take on the modern soul idiom is that ‘Heartbeat’ is stuffed with plenty more similar style grooves. ‘Rise’ is another excellent example of that sound… no wonder it was released as the follow up single to the aforementioned ‘More’. Sadly it could well have gotten lost in the pandemic confusion… you’d be crazy to miss out on it now. The album’s title tune is another worth checking… the clever production bolstering the optimism quotient.

Elsewhere, ‘Take Your Time’ is a tad funkier thanks to the wah wah guitar effect while the mid-tempo ‘Glad I Got To Know You’ has its own special charm…. another typical, Brit take on modern soul.