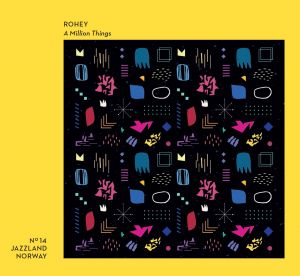 In recent weeks, noted UK tastemakers and radio broadcasters, Gilles Peterson and Jamie Cullum, have been vociferously championing hotly-tipped Norwegian quartet, ROHEY, whose keenly-anticipated 12-track debut album has just been issued via Bugge Wesseltoft’s influential Oslo-based Jazzland label. Taking their name from their lead singer, soulful-voiced Rohey Taalah – who sings in English –  the group’s sound is a striking amalgam of neo-soul, nu-jazz and jagged, broken beat flavours and what results is an arresting hybrid that comes across like Jill Scott fronting Hiatus Kaiyote or D-Influence, perhaps.

The group’s second single, ‘I Found Me,’ is the album’s opener and what’s striking about it is the juxtaposition of co-writer Ivan Blomqvist’s fusion-esque, spacey synth chords with Taalal’s mellow vocals, which ride on a sinewy, acid jazz-like backbeat provided by bassist Kristian B Jacobsen and drummer Henrik Lødøen. The song’s lit up by a chorus that’s as infectious as a winter cold. By contrast, ‘Tell Me,’ illustrates the group’s sensitive side – it’s a beautiful ballad lead by Blomqvist’s eloquent acoustic piano chords. ‘Is This All There Is,’ released last year as the group’s debut single, is more aggressive, boasting a dramatic Nai Palm-style hook line that reeks of Antipodean future funk ensemble, Hiatus Kaitoye.

Other highlights are the pulsating, fusion-esque ‘Can’t Get This’ – which speeds along at high velocity – the more strident ‘My Recipe’ – where Taalal’s vocals are more declamatory (think Ledisi meets Chaka Khan), and the gently throbbing ‘Cellphones & Pavements.’  Also subdued and reflective are the tracks ‘Responsibilities,’ and ‘My Dear,’ the latter an emotionally-moving ballad characterised by jazzy chords and deftly-nuanced vocals.

As debuts go, this is a strong one by the Scandinavian quartet who look set to accrue many followers outside of their native Norway. Rohey Taalal will, understandably, perhaps, get most of the plaudits for her outstanding vocal performances but that shouldn’t eclipse the sterling work by the rest of her band mates, whose contributions are just as important in the shaping of the group’s distinctive sound. Very impressive.