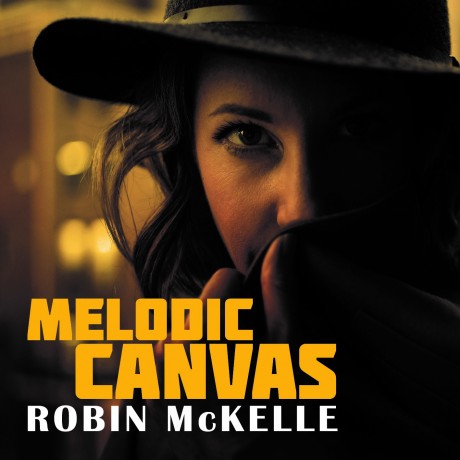 2018 is only three short months long and already we’ve been treated to some fabulous music from the distaff side of the soul scene…. I mean Kathy Kosins’ ‘Uncovered Soul’, Diane Shaw’s ‘Second Chance’, Lisa Stansfield’s ‘Deeper’ and Lindsey Webster’s ‘Love Inside’. There’s enough there to satisfy each and every soul glutton but now to add to the sumptuousness of that banquet songstress Robin McKelle is all set to release this brand new collection.

The soul world first got to know and love Ms McKelle back in 2013 via her still relevant ‘Soul Flower’ album. The set boasted the evergreen ‘Fairytale Ending’ (picked up by Expansion as one of THE tunes of that year) and the lovely ‘Love’s Work’ – a duet which helped introduce a relatively unknown Gregory Porter to a wider audience. Since then Robin’s consolidated her position as a major leaguer with the album’s ‘Heart Of Memphis’ and ‘Looking Glass’.

This new long player, ‘Melodic Canvas’, sees Robin make a subtle change of musical direction – just as she did in 2013 with ‘Soul Flower’. Before that Ms McK had released three albums –all in the jazz idiom and for ‘Melodic Canvas’ she revisits those jazzier roots. She says that after ‘Looking Glass’ (her 2016 album) she worked a lot with jazz musicians on the European circuit (Robin is a major name in France in particular) and decided that the time was right to reconnect with jazz and she focused on crafting new songs that would allow her that extra degree of freedom of expression that jazz brings.

And of those songs, there’s none finer than ‘Lyla’. This is a stark yet beautifully sympathetic look at the difficulties facing young people in the flim/flam, superficial world of social media and digital messaging; it’s about dreaming; it’s about the passion of reality and  a whole lot more…. if it doesn’t move you, nothing will.

‘Simple Man’ is also set to become one of the best tunes of 2018. This one is about the difficulties and prejudices that face immigrants every day and though from that description it might sound heavy; it isn’t… it’s light and lithe with a hint of optimism; a delight.

Elsewhere, well the most interesting track, I guess, is ‘Il Est Mort Le Soleil’. Yep, that’s right a French song…. Robin, as we said is “big in France” and this, her first recording in French, is her thank you to her loyal French fans. It’s a melancholic meander that befits the title with more beautiful piano from Shedrick Mitchell. Interestingly the song is a French original. It was introduced to US jazz audiences when Ray Charles recorded an English version; Robin offers an English version too.

Other covers include a take on the spiritual ‘Swing Low’ (Robin’s mother sang gospel) and a look at Allen Toussaint’s ‘Yes We Can’ with some funky sax from Chris Potter. So, yes –’Melodic Canvas’ is ostensibly a jazz album but be sure the soul is never far away. Whatever, it will be remembered as one of 2018’s best.

Find out more about Robin McKelle and ‘Melodic Canvas’ by visiting our interview archive.