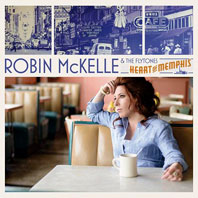 Last year the lovely Robin McKelle won the hearts of the soul community with her ‘Soul Flower’ album. The lady, who’d come out of a jazz background, re-wrote the modern soul primer as cuts like ‘Fairy Tale Ending’ and the sublime duet with Gregory Porter, ‘Love’s Work’ , found themselves on everyone’s year end, best of listings. It would have been so easy for Robin to follow up ‘Soul Flower’ with more of the same. Few would have complained; but Ms McKelle was never one for sitting on her laurels. So she chose to push her personal soul envelope by decamping to Soul’s spiritual home to work on the ‘Soul Flower’ follow up. Ensconced at Memphis’ Electrophonic Studio, she’s now delivered a new set that’s shaping up to be a contemporary soul masterpiece. Yes, in places ‘Heart Of Memphis’ echoes ‘Soul Flower’ but elsewhere Robin is emphatically saying that she’s moved on. Evoking the spirit of Otis Redding and James Carr and the commitment of Al Green and Ann Peebles, ‘Heart Of Memphis’ is just about the consummate modern soul album.

The set’s stuffed with Hi/Stax style Southern soul rollers; try ‘About To Be Your Baby’, ‘Like A River’. ‘Easier That Way’ or ‘What You Want’ to get the album’s overall feel… each one right in the pocket with tight beats, rasping brass and a passionate vocal – classic “soul” if you would. Maybe ‘Good Time’ and ‘Good & Plenty’ are a tad to frantic to be classed “classic” but to counter those there are two quality, smouldering ballads. The melancholic ‘Forgetting You’ will recall prime time Candi Staton, while the equally ponderous ‘It’s Over This Time’ has the ghost of James Carr wandering its charts. The album’s title track is another with “classic” stamped all over it. It’s based on the familiar “train” theme and the country garnish reassures you that Robin knows that country and soul were always familiar bed fellows. The most familiar song on the 13 tracker is a cover of ‘Don’t Let Me Be Misunderstood’. As she did with ‘Walk On By’ on ‘Soul Flower’, Robin offers a version that’s very different to both Nina Simone’s original and the Animals’ hit version. Try it, you’ll like it!

That just about leaves two other tracks – ‘Control Yourself’ and ‘Baby You’re The Best’. These are the tunes that provide the link to ‘Soul Flower’. The former is a beautiful string-driven thing while ‘Baby You’re The Best’ underlines what soul insiders already know… Robin McKelle is a serious soul contender. Both tunes are receiving considerable attention from soul tastemakers and it’s so easy to hear why.

2014 is still in its infancy and already we’ve had one epic soul set – Sharon Jones’ ‘Give The People What They Want’. Straight away we have an album to rival it. Robin McKelle’s ‘Heart Of Memphis’.