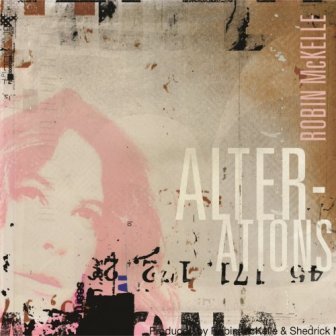 For her ninth album, ‘Alterations’, US soul and jazz chanteuse Robin Mckelle has chosen to do something very different to her previous recordings; she’s chosen to record a set of covers – though not just any covers. The song selection on ‘Alterations’ (with one exception) is drawn from the repertoires of celebrated female artists… people like Joni Mitchell, Adele, Nina Simone and Janis Joplin. Robin explains that after recording a few albums of her own original music she wanted to focus once again on her first passion – just singing and, by extension, interpreting the music and lyrics of others. So she set about choosing a set of songs which spoke directly to her emotions allowing her interpretative instincts to take flight… and how!

‘Alterations’ is no “karaoke covers” album; rather it’s a personal journey in music with each song given a totally different reading to the original version. That’s most apparent on Robin’s reading of Dolly Parton’s ‘Jolene’. Where the original was sprightly, jaunty even, this new take is almost a southern soul meander on which the lyrics seem to have more desperation and meaning. Janis Joplin’s wish-list ‘Mercedes Benz’ is another southern country/soul steamer. The vocal’s smoother than Joplin’s but no less raunchy.

Much more sombre is the visit to Billie Holiday’s ‘Don’t Explain’ which is offered with a pleading reassurance, as is the cover of Lana Del Ray’s ‘Born To Die’ where amongst the highlight is Marquis Hill’s trumpet solo… and that’s another of this collection’s attractions. The players, marshalled by keyboardist Shedrick Mitchell (Maxwell’s MD by the way), seem to understand the concept and play with love and empathy. Their CVs tell us that they are all rooted in jazz /soul and rock – and it shows. As an example try ‘Alterations’ version of Sade’s ‘No Ordinary Love’ where the band (notably guitarist, Nir Felder and bassist Richie Goods) work nimbly with Ms McKelle to gear up from a subtle understatement to an electric climax.

The only original song on the album is McKelle’s own ‘Head High’ – a song that tells a story about the strength and the power the female singer – so, lyrically and, importantly, musically it chimes with the album’s theme. The other cover songs are Joni Mitchell’s ‘The River’, Adele’s ‘Rolling In The Deep’, Amy Winehouse’s ‘Back To Black’ and Carole King’s ‘You’ve Got A Friend’ which, with just simple, tasteful piano accompaniment from Shedrick Mitchell, brings the collection to a most satisfying of ends. Find out more about this album by accessing our recent Robin McKelle interview.