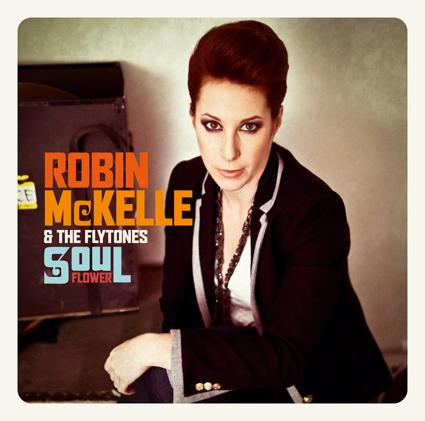 Robin McKelle hails from Rochester, New York and she boasts a varied and impressive music CV. Her mother sang gospel – and young Robin was righteously impressed but at 15 she took the secular route working with a number of youthful R&B groups. After taking up the piano and French horn, she studied jazz at the University of Miami before attending and graduating from the Berklee College of Music in Boston. Moving to the west coast, she found work as a backing singer – most notably with Michael McDonald and Bebe Winans. She subsequently went back to the Berklee College Of Music as a teacher and entered the Thelonious Monk competition in Washington, winning third place in 2004 for her jazz vocal prowess. Encouraged, she went on to record a trio of jazz albums –’Introducing Robin McKelle’ (2006), followed by ‘Modern Antique’ (2008) – two big-band swing sessions – then 2010’s ‘Mess Around’. For this new album Robin has chosen to go back to the music she grew up loving – classic soul – and to help her deliver she’s put together a tight organic band (the Flytones) with whom she’s proud to share billing. Together they create a great modern soul set that is truly progressive- yet with its roots firmly in soul’s rich heritage.

Confident in her abilities, Robin (in collaboration with various members of the Flytones) has penned most of the material herself … and one song in particular is strong enough to become an instant soul classic – it’s the wonderful ‘Fairytale Ending’. The tune is a lovely slab of mid-tempo retro soul. Featuring beautiful brass, a haunting B3 and an ear-worm of a piano riff, it rolls with the catchiest chorus hook you’ll hear all year. Add to that a fabulously aching vocal from Ms McKelle and you have soul perfection. I’m putting it in the same league as Jennifer Holiday’s ‘Love Stories’…. it has a very similar feel. Almost as good is the gentle ‘Miss You Madly’ which references Marvin Gaye’s ‘Pretty Little Baby’ while if you’re a fan of proper soul duets try ‘Love’s Work’. Here Robin is joined by new jazz super star Gregory Porter and the result is wonderful. It has all the qualities of the great 60s/70s Stax duets (think Billy Vera/Judy Clay). Porter’s voice is a remarkable instrument and McKelle’s expressive contralto is the perfect complement. ‘Tell You One Thing’ is another noteworthy original. Fast and furious, it combines elements of Northern soul with rock and country. Quirky, yes – but not as quirky as the invasive ‘Don’t Give Up’.

To complete the album there’s a trio of brave covers. First up there’s a nod to the singer’s jazz background with a version of Frank Sinatra’s ‘I’m A Fool To Want You’ which Robin takes into Amy Winehouse territory. Then there’s a fairly respectful treatment of the Bee Gees’ ‘To Love Somebody’ (a duet with soul veteran Lee Fields, by the way) and finally Robin takes on ‘Walk On By’. Her philosophy here seems to be that if you’re going to cover such a well-known song why do it like all the other versions out there. So, Robin cranks up the pace to an almost Northern tempo and then gives her all… and guess what? It works. Robin’s wonderful, world-weary voice carries the day (aided an abetted by some great piano courtesy of Ben Stivers).

We’re told that ‘Soul Flower’ was the album that the singer said she’s always make. At one time she was going to call it ‘The Real McKelle’…. The Real McCoy, I’d say… great stuff.