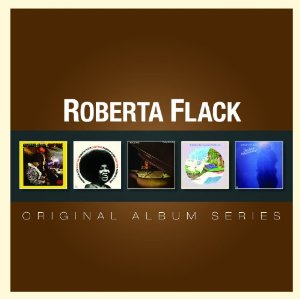 Although her voice isn’t athletic and declamatory like Aretha Franklin’s, Roberta Flack is undoubtedly one of soul music’s best female singers. Her style is very different to most church-raised vocalists as she avoids histrionics and intricate note-bending and goes for a simpler and subtler approach, caressing lyrics with a voice that’s full of sincere feeling. Flack’s intimate style has served her well over the years and although she’s just released her first album in many-a-year (‘Let It Be Roberta – Roberta Flack Sings The Beatles’) it’s her early work for Atlantic Records in the late-’60s and early-’70s that truly captures her genius. The North Carolina singer’s fruitful Atlantic tenure is chronicled by Rhino’s ‘Original Album Series,’ which comprises five of Flack’s first six albums for the company – sadly, it omits her 1970 sophomore LP, ‘Chapter Two,’ which is bypassed and replaced by 1977’s ‘Blue Lights In The Basement.’

Flack’s old Joel Dorn-produced albums have been crying out for fresh remastering for years but don’t receive it here. Instead, Rhino have used existing CD masters (as they do for all the ‘Original Albums Series’ collections), which sonically are adequate but not outstanding. Even so, the quality of Flack’s music shines through. ‘First Take’ is her masterful debut from ’69 and was the album that introduced her exquisite synthesis of soul, jazz and folk to the world. Her poignant – and to these ears, definitive – rendition of Ewan McColl’s ‘The First Time Ever I Saw Your Face’ is a standout (it was also the record that made Flack a bona fide star, after it featured on the soundtrack to the 1971 Clint Eastwood movie, ‘Play Misty For Me’). Just as arresting is her funky soul sister take on the Gene McDaniels-penned Les McCann/Eddie Harris hit, ‘Compared To What.’ But it’s on ballads that Flack’s unique quality as an interpreter of other people’s material reveals itself. The gospel song, ‘I Told Jesus,’ is haunting in its sonic starkness and the romantic ballad, ‘Our Ages Not Our Hearts,’ is truly moving.

Flack’s third album, ‘Quiet Fire’ – a title that appositely sums up the singer’s soft-focus intensity – includes some blistering widescreen gospel funk (the biblical-themed epic, ‘Go Down Moses’) and the evocative storytelling ballad, ‘Sunday And Sister Jones.’ But again, it’s on ballads that Flack excels, such as a heavenly rendition of ‘Bridge Over Troubled Water,’ and ‘Let Them Talk’ and ‘Sweet Bitter Love.’ The most memorable ballad of Flack’s career came as the title track of her fourth album, 1973’s ‘Killing Me Softly,’ which includes the excellent ‘No Tears (In The End)’ as well. The album also spelled the end of her association with producer Joel Dorn and on ’74’s ‘Feel Like Makin’ Love’ she produced herself using the pseudonym Rubina Flake. The jazzy title cut was a massive global hit but the album’s packed with plenty of other great cuts: ‘Mr Magic,’ and ‘I Can See The Sun In Late December’ to name two.

The final album in the pack is ’77’s ‘Blue Lights In The Basement.’ The killer cut is a hit duet with Donny Hathaway, the fantastic Mtume/Lucas-penned/produced song, ‘The Closer I Get To You.’ Other standouts are ‘This Time I’ll Be Sweeter,’ and ’25th Of Last December,’ both of which highlight Flack’s intimate delivery.

This set affirms that as a singer, Roberta Flack’s a great storyteller and someone who is able to bring lyrics alive with her singularly soulful approach to her material. For those listeners who want to delve more deeply into Flack’s catalogue – and travel beyond the familiar hits – the music on this retrospective will come as a revelation.