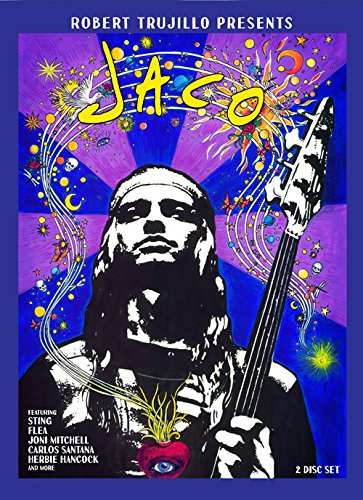 A defining moment in my early musical life was seeing fusion giants Weather Report live at Bristol’s Colston Hall in October 1977 and being completely blown away by the outrageous virtuoso playing of the band’s young, skinny, bandana-wearing, long-haired bass player. He had a solo spot in the show where he looped a bass riff into a hypnotic groove using an echoplex and then proceeded to play some astonishing sounds on top, even dropping in a quote from Hendrix’s ‘Third Stone From The Sun’ using a raucous fuzz tone. My jaw, like many other’s that night, hit the floor in astonishment. His name? Jaco Pastorius. Ten years later, Pastorius, unbelievably,  was dead, beaten into a fatal coma by a nightclub bouncer. Though his life was cut tragically short – he was just thirty five when he died – Pastorius had written his name into the history books with the way he revolutionized the sound and role of the bass guitar.

Pastorius’s rise to fame was spectacularly meteoric. The son of a big band singer and drummer, he was steeped in music from a young age. He started out playing drums like his dad but became attracted to the bass, and in particular a fretless Fender model, on which he developed his own distinctive signature style.  He played bass in local Florida bands before joining the ranks of large soul/funk aggregation, Wayne Cochran & The CC Riders, in the early ’70s and in 1975, he signed a solo deal with Epic after impressing Blood, Sweat & Tears drummer-turned -producer, Bobby Columby. Pastorius knew how good he was, so much so that he introduced himself to Weather Report’s Joe Zawinul as ‘the greatest bass player in the world.’ Zawinul was, understandably, skeptical at first but Pastorius’s prodigious talent quickly won him over and in late ’75 the young Floridian replaced Alphonso Johnson in the band.

As a member of Weather Report, Jaco’s fame accelerated as he took the bass guitar to new levels of expression and virtuosity on bestselling albums like ‘Black Market,’ and ‘Heavy Weather.’  But the price of fame was a marital breakup, the disintegration of his domestic life, and, perhaps inevitably, he fell victim to the drink and drugs excesses normally associated with a flamboyant rock and roll lifestyle. All this took its toll on Pastorius’ fragile mental health – he was diagnosed with bi-polar disease – and by the mid-’80s he was on skid row, busking for small change.

While it’s undoubtedly an affectionate portrait, ‘Jaco’ – which is the brainchild of producer (and Metallica’s bass player) Robert Trujillo – doesn’t attempt to gloss over the problems that eventually contributed to Pastorius’s creative decline and eventual demise. The film’s directors Paul Marchand and Stephen Kijak skillfully combine previously unseen home movie footage and rare family photos to build a vivid and intimate picture of Jaco’s early years and personal life. Providing the commentary are numerous ‘talking head’ interviews with friends, family and fellow musicians. Among the contributors are Joni Mitchell, Joe Zawinul, Wayne Shorter, Pete Erskine, Carlos Santana, Herbie Hancock, and even Geddy Lee from Rush and Flea from Red Hot Chili Peppers, all of whom offer insight into the personality and behaviour of Jaco the man and musician. There’s also plenty of decent footage of Jaco performing on stage and a bonus second disc in the package contains numerous ‘outtakes, anecdotes and stories’ to help etch an even more detailed portrait of the pioneering bass player. A sensational piece of filmmaking.