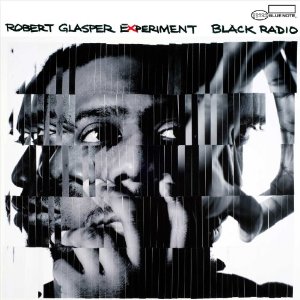 For those people that think that Robert Glasper can comfortably be pigeonholed as a jazz pianist then this new album, his fourth outing for Blue Note, will raise a few eyebrows. The jazz police might accuse him of treason though his last album 2010’s schizophrenic ‘Double Booked’ – which was half straight ahead jazz and half R&B, the latter played by his Experiment band – signposted the Texas keyboard maven’s current musical fascination. Glasper hasn’t left his roots totally behind – there’s still a jazzy aura to ‘Black Radio,’ especially in its lush electronic keyboard washes, but overall, Glasper digs deep into a hip-hop infused urban sound, seemingly playing second fiddle to a bevy of featured name vocalists from the world of contemporary R&B but actually directing and providing fabulous arrangements.

Some impressive names turn up as guests – among them Erykah Badu, Ledisi and Lalah Hathaway – but ultimately, none of them eclipses Glasper; the musical vision is his alone, which is an attempt to penetrate the mainstream, get played on black radio (hence the album’s title) and ultimately reach a larger and younger demographic. That might sound like a cynical and calculated attempt to be commercial but it comes from a genuine and heartfelt desire by the keyboard man to reach beyond the limitations and sometimes blinkered vision of the jazz ghetto and get his music heard by more people.

‘Black Radio’ is distinguished by a tremendous version of Mongo Santamaria’s jazz classic, ‘Afro Blue.’ Erykah Badu guests on vocals, and framing her ethereal, Billie Holiday-esque intonation and phrasing, is a wonderful Glasper arrangement that includes breathy flute sounds. A lovely deconstruction of Sade’s ‘Cherish The Day’ – featuring the sonorous and soulful vocals of Donny Hathaway’s daughter, Lalah – is another standout as is ‘Gonna Be Alright’ spotlighting the athletic Ledisi. There are some strong performances, too, by male vocalists – Mint Condition’s Stokley Williams fronts ‘Why Do We Try,’ while Musiq Soulchild duets with Chrisette Michel on ‘Ah Yeah.’

Even better is an R&B redering of David Bowie’s ballad, ‘Letter To Hermione,’ where vocalist Bilal takes centre stage. If that cover version might disconcert jazz fans then a retooling of the grunge rock anthem, Nirvana’s ‘Smells Like Teen Spirit,’ is even more controversial with Glasper imbuing it with a distinctive urban sound with the use of vocoders. Sterling cameos from rappers Mos Def, Lupe Fiasco and Shafiq Husayn serve to enhance the heavy urban vibe that is Glasper’s goal and adds sonic gloss to what is an impressive and potent offering.