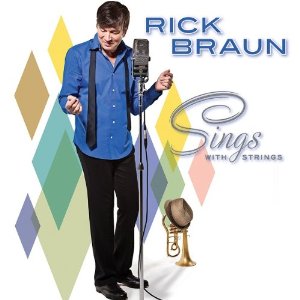 Rick Braun is rightly known as one of smooth jazz’s top horn players. Yet throughout his career he’s always dabbled in vocals too. Indeed on high level tours with people like Rod Stewart and Sade he was used not just as lead horn man but also as a valued backing singer. Maybe no surprise then, that for this – his latest project – he offers a full-on vocal set.

For this departure Rick has chosen 11 songs largely taken from what is loosely termed “the great American songbook”. The chief exception is the French language song ‘Plus Je T’Embrasse’ on which he’s joined by French star Jasmine Roy. The song (known in its English incarnation as ‘Heart Of My Heart’) is obviously the choice of the album’s producer/arranger Philippe Saisse. The French pianist keeps the arrangement here (and throughout) uncomplicated and undemanding. Maybe he knows Rick’s limitations as a vocalist. He has a pleasant, tuneful voice but he’s clearly no Sinatra or Bennett. A fact best witnessed on the lovely Johnny Mercer/Michel Legrand song ‘Once Upon A Summertime’. On an essentially simple song, Tony Bennett, for instance, turns in a masterful performance injecting just the right amount of pathos into the self-pitying lyric. Here Rick doesn’t quite bring off the vocal though his horn work does have a haunting quality. Indeed throughout the LP Braun’s flugelhorn playing is outstanding – adding perfect shading to tunes like ‘Time After Time’, ‘I Didn’t Know What Time It Was’ and ‘The Good Life’. As the LP’s title suggests, the whole’s sweetened with some lush strings under the direction of Adam Klemens and they add to the easy-listening nature of the set.