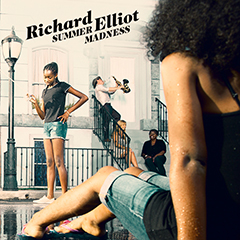 Scottish-born, LA-based smooth jazz sax man, Richard Elliot has enjoyed an illustrious career. It began to take off in the 80s when he was part of powerhouse soul and funk stars Tower of Power. There followed solo success first with Blue Note then a succession of other leading jazz labels. At the same time he was the go-to session and road saxophonist for people like Smokey Robinson and the Temptations. Now some 20 or so solo albums down the line, Elliot launches his latest effort – ‘Summer Madness’, an album, he says, that goes back to his soul and funk roots: “When I was growing up in the ’70s and first learning to play the saxophone, I was mostly attracted to instrumentally based R&B and to jazz that had R&B roots. This new record definitely goes down that path, leaning more on the funk side.”

Elliot’s ten tracker is named for his cover of Kool and the Gang’s gentle anthem and the sax star treats it respectfully… a classic slice of contemporary smooth jazz, if you would. The long player offers two more covers. First there’s Elliot’s take on Spyro Gyra’s ‘Cachaca’ which has some live atmospherics; then there’s a reading of Carlos Santana’s ‘Europa’. This, we’re told, is Elliot’s homage to one of his heroes and inspirations, the late Gato Barbieri—who, of course, covered the tune too. It’s always been a lovely melody and again this new version takes no liberties.

Best of the originals? Well ‘Breakin’ It Down’ rides a pleasing smooth soul groove, echoed on ‘Harry The Hipster’ (nothing to do with ‘Harry Hippy’ by the way) and ‘Mr Nate’s Wild Ride’ (a showcase for bassist Nathaniel Philips); then there’s ‘West Coast Jam’ – very polite funk but with an attraction in the massed horns of Elliot, producer Rick Braun and extra sax side man Curt Waylee. Indeed, throughout, it’s the use of those three horns that gives ‘Summer Madness’ something a little different.