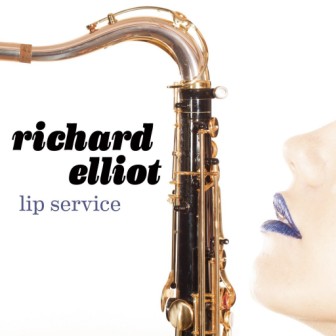 It’s been thirty years since sax man Richard Elliot made his solo recording debut and to celebrate, the Scots-born but committed Southern Californian releases this very sensual album. The grooves on ‘Lip Service’ are still soul-based (that Tower of Power influence, I guess) but things have a much softer edge. Try the opening ‘Desire’ to hear what I mean. It’s a slinky, sensual meander but with a great soul undertow. It features some tasty guitar too, courtesy of producer Paul Brown. There’s plenty of the same on the title cut, ‘Sweet Spot’, ‘Sookie Sookie’, ‘All The Way’ and a cover of the Manhattans’ ‘Shining Star’.

Much sparser is the cover of Bruno Mars’ ‘When I Was Your Man’. Great to see a veteran player dipping into current flavours and Elliot almost make the tune is own, stripping it right down to just sax and keys (courtesy of Lew Laing). The album’s third cover is, I think, the highlight. It’s a treatment of Brian McKnight’s ‘Anytime’. It’s quite lovely and features crystalline keys from Tracy Carter that will recall prime time Bob James.

The only cuts on which the music lifts itself above the parapet are ‘Givin’ It Up’ and the Latino-inflected ‘City Lights’; but both remain stately and totally in keeping with the album’s overall ambience.