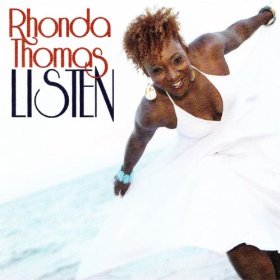 Rhonda Thomas hails from Atlanta where she was part of the whole nu-soul culture. Boasting an impressive CV (work with Luther Vandross, Roberta Flack, Roy Ayers and Isaac Hayes amongst others), she’s best known in Europe for her work with Jiva while a low key UK tour in 2007 to promote her last album, ‘Breathe New Life’, won her critical acclaim. This new set is being partly promoted by Brian Hurst’s soulandjazz.com set up and it easy to hear why Brian picked up on it. Rhonda’s music, whilst underpinned by gospel sensitivities, sits right on the cusp of the soul and jazz divide and from the outset we need to say that ‘Listen’ isn’t an easy ride. Don’t come to the album looking for banal lyrics and sing-a-long melodies; Ms. Thomas sees herself as a serious artist who strives to spread her spirituality via the music she makes. Coming out of the Church, she makes no distinction between her secular and spiritual songs… a stance made clear on one of the album’s key cuts – ‘Unmerited Favour’. Here she articulates her belief that she can serve the Lord in a lots of different ways, yes – even by singing the Devil’s music. There is, though, nothing satanic about preaching on the plight of African women (‘Darfur Woman’) or indeed western girls who are made to feel bad because their bodies don’t fit pre-determined stereotypes (‘The Light’). See what I mean about a hard listen?

If you want a little lightness, head for cuts like ‘When Music Was Good’ and the LP’s title song. Their Latin rhythms will recall Rhonda’s work with Jiva. Elsewhere the biographical nature of ‘Peppermint Leaves’ harks back to the best of Jill Scott while ‘Best Intentions’ is a great slice of Atlantean neo-soul. Best tracks on the album though are the two covers – Isaac Hayes’ ‘Do Your Thing’ and the Weather Girls’ ‘Just Us’ . That latter is a crisp and steady beater while the Hayes’ tune (Rhonda worked in Isaac’s review for eleven years, by the way) is quite transformed into a real loose workout. If you want things properly jazzy – on ‘Do What You Say’ Rhonda shows she can scat with the very best, though I fail to see the point of the cod MC intro to the cut. Simply by listening, we don’t need to be told of the lady’s considerable talent… albeit a very serious talent. Maybe, just maybe, a little more levity could have made a thoroughly decent album into a very, very good one.