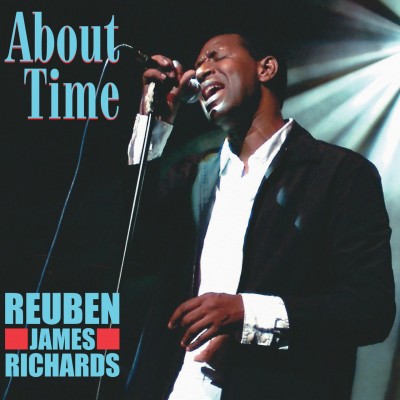 If there were awards for appropriate album titles, this one would win hands down… you see ‘About Time’ has been over ten years in the making! So here’s the back story; in the mid 90s UK soul wannabee, Reuben James Richards, released a critically acclaimed single. ‘Hold On My Heart’ was a languid slice of Southern style soul that drew praise from radio jocks, reviewers and music biz insiders. Why, even the great Jerry Wexler opined that Richards possessed one of the finest soul voices he’d heard in a long, long time. Sadly all that positivity wasn’t translated into any kind of commercial success and a planned follow up and album didn’t materialise.

Producer Dave Williams and Reuben reluctantly went their separate ways but earlier this year they reunited and went into The Grange Studios in Norfolk to complete their unfinished business. Using a team of top session players, including imported Hi studio singers Sandra Rhodes, Charlie Chambers and Brenda Barnet, the ten tracker that is ‘About Time’ is ready for consideration and given what we’ve said, it should come as no surprise for you to learn that the overriding flavour is vintage southern style soul, albeit with a distinct UK flavour.

The aforementioned ‘Hold On My Heart’ (in a new remix) takes pride of place and it is a steamy, soul builder with classy Memphis brass and sweetly cooed BVs. Vocally Reuben shows a fragility that in places recalls Aaron Neville but as the song strengthens his voice rises to the occasion and I began to think of UK stars Steve Winwood and Joe Cocker! There’s more of the same on ‘Please Let Me Down Easy’, ‘I’m Only Gulity Of Lovin’ You’, ‘Your Broken Promises’ and ‘Let Me Be The One’… lugubrious, mournful Southern style soul.

Best of the brisker moments are ‘We’ll Always Be Together’ and the funkier ‘Sugar Cane’ though the more mid-tempo ‘Who’s Foolin’ Who’ stands out too. By the way that’s not the Little Milton classic… like everything here it’s an original song from the producer. Williams has clearly listened to lots of Memphis soul and his songs, his productions and his arrangements pay proper homage to that city. For his part Richards’ vocals show he’s done the same kind of homework…. even his logo owes something to the famous Stax clicking finger logo.