REN HARVIEU: ‘Through The Night’ (Island) 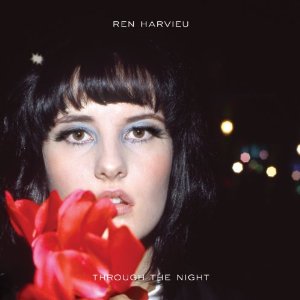 Astutely tipped by a BBC taste-making panel at the beginning of the year to be one of the key must-hear new artists of 2012, 21-year-old Salford-born singer Lauren (‘Ren’) Harvieu lives up to the hullabaloo of the advance hyperbole with what is a remarkable debut album. For once, it’s a genuine case of believe the hype. But Ren’s journey from a youth club talent show winner to a budding pop starlet hasn’t been an easy one – after signing to Island and recording her debut album, she was seriously injured in a freak accident: an inebriated party reveller vaulted over a hedge into a garden where Ren was hanging out with friends and landed on her back, causing severe spinal injuries. After several operations and many months of recuperation (at one point she was told that she wouldn’t be able to walk again) the battling young singer finally gets to unveil a debut album that heralds the arrival of a major new singing talent.

The first thing that strikes you about ‘Through The Night‘ is the astonishing maturity of Ren Harvieu’s voice; its tone is gorgeously rich and creamy but tinged with melancholy and imbued with a deep soulfulness – not the sort of voice that would normally be associated with a 21-year-old girl hailing from the North West of England, perhaps. Comparisons have been made with Dusty Springfield and Peggy Lee – and Ren’s even been described somewhat predictably as the ‘new Adele’ – but in truth she’s got a sound that’s uniquely her own and that’s what makes this album so striking and enjoyable.

Indeed, the whole project has an aura of freshness about it and producer, Jimmy Hogarth, provides Ren with opulent orchestral backdrops that frame her yearning voice. There’s also a palpable ’60s Brill Building feel to the music, though the album is not self-consciously retro in stylistic terms. One track stands out above all the others and that’s the incredible title cut, a sophisticated and haunting pop-soul aria (co-written by the singer) that begins quietly and then slowly builds into a dramatic, multi-textured affair with densely-layered background harmonies and a lush orchestral score that imbues it with a cinematic grandeur. Also, the track has an addictive quality that makes you want to listen to it over and over again.

Other highlights include the driving, anthemic, ‘Open Up Your Arms,’ featuring a tremendous symphonic orchestral arrangement from Jules Buckley. ‘Tonight’ has a bluesy, torch song, swagger while the sonic drama of ‘Walking In The Rain’ reverberates with ’70s pop echoes. ‘Forever In Blue’ is a slow, moody, and slightly eerie lament that showcases Ren’s voice on a melancholy tale of heartbreak. ‘Twist The Knife’ is more upbeat despite its dark lyric and the mellow, mid-paced ‘Holding On’ has shades of Laura Nyro and Carole King. The album’s closer, ‘Love Is Like A Melody’ (also co-written by Ren), almost has an anthemic quality and showcases the hauntingly beautiful sonorities of a voice that is destined to be the sound of 2012.

So, as debut albums go, this is a very good one indeed – and the fact that Ren Harvieu should get even better as the years go by will hopefully mean that she’ll be around for a long, long, time to come.