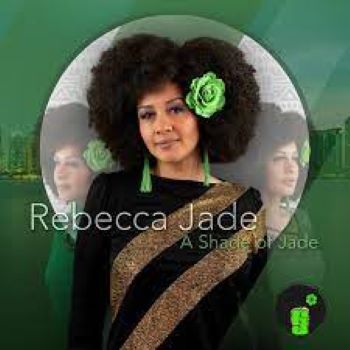 San Diego’s REBECCA JADE is a name new to us. We’ve learned however, that Rebecca’s no newcomer. She’s been on the scene for almost two decades and has performed all over the world with some  big names. Since 2017 she’s been working with Sheila E and appeared in the Emmy-nominated show, ‘Let’s Go Crazy’, the GRAMMY Salute to Prince. At the 2020 Academy Awards Ms J sang BVs for Elton John and  has worked the jazz cruise and concert circuit with Dave Koz while on stage she’s opened for people like Will Downing, Boney James and Jeffrey Osborne. For some time she also fronted a band, Rebecca Jade and the Cold Fact. Between all that Rebecca also acts. She featured  as a singer in the movie ‘5 Hour Friends’. We’re told that she’s also a pin-up model for vintage-inspired clothing!

With all that going on, little wonder that her own solo recording career seems sporadic. Discogs, for instance, lists just a few releases – 2011’s ‘The Jade Element’ album and a couple of sets with Cold Fact.  Now, though, Rebecca has just released ‘A Shade Of Jade’ – a full blown solo album on which she shows her prowess both as singer and sensitive song writer. The album’s lead-off single, a soulful ‘What’s It Gonna Be’ caused quite a buzz earning two San Diego Music Awards  for “Best Music Video” & “Best R&B/Funk/Soul Song”. And it’s easy to hear why. The song is a convincing contemporary soul groove with thoughtful lyrics. The set’s second single, ‘Show Me’ is earning accolades too… a riser on Billboard’s New and Active singles chart .

The good news is that those two cuts aren’t the only gems on the 10 track album. Amongst the other highlights are the gentle ‘My Reason’ and the hypnotic ‘Bottle Up Magic’. Both feature guest sax players. On the former Jade’s long-time compatriot, Dave Koz takes the sax part helping craft as good a soul ballad as you’ll hear all year; on the latter the sax lead is taken by Eric Darius who adds texture to the easy-like-Sunday-morning tune. Both tracks sit sweetly on the cusp of sophisticated soul and smooth jazz and in these troubled times there’s always room  for those soothing sorts of sounds.

The good news is that herein there are plenty more of those soothing sounds. Cuts like ‘Other Side Of The Moon’, ‘Beautiful Lies’ and ‘Drift Away’ (not the Dobie Gray classic, by the way) are splendid examples of grown up music – melodic and with resonant  lyrics that tell stories of love, hope and fortitude  and are delivered in Jade’s richly expressive voice which betrays her almost 20 years in the business.

That expressive voice is one of the factors that gives the album its unity. The other is the fact that most of the tracks feature the same core band… Kyle Bolden on guitar, Raymond McKinley on bass, and Charles Streeter Sr. on drums, all expertly marshalled by keyboardist and co-producer Carnell Harrell.