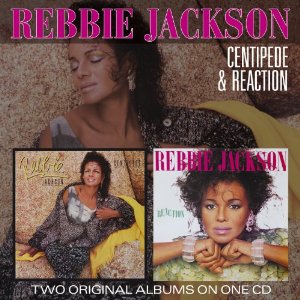 It’s hard to believe (especially when looking at the young woman on the cover to this CD reissue) that Rebbie Jackson – who was born plain old Maureen Jackson – is the oldest of the Jackson clan and has just celebrated her sixtieth birthday. Though her recording career was eclipsed by younger siblings Michael and Janet, Rebbie had a good crack at solo success in the 1980s. This ‘twofer’ contains the 1984 Columbia album ‘Centipede’ and its 1986 follow-up, ‘Reaction.’

‘Centipede,’ helmed for the most part by producer Wayne Henderson, yielded Rebbie’s biggest US hit, the title track, which made #4 on Billboard’s R&B lists. It’s a catchy little tune, penned and produced by Michael Jackson, no less, who also helps out on background vocals. Michael’s input also extends to other cuts – he co-penned the dancer, ‘Come Alive It’s Saturday Night,’ and ‘Hey Boy,’ with brother Jermaine. The pair collaborate with brother Tito, for the mid-tempo groover, ‘Open Up To My Love.’ Overall, it’s a satisfying little set – there’s even a zippy cover of Prince’s catchy ‘I Feel For You’ (a post-Chaka Khan rendering) – and although Rebbie’s voice is light (some might say slight) and more suited to pop, perhaps, she acquits herself well. Also listen out for the doo-wop-infused Smokey Robinson-penned ballad, ‘A Fork InThe Road.’

By contrast, 1986’s ‘Reaction’ suffers from two many cooks in terms of production: namely, Surface’s David ‘Pic’ Conley (who went on to helm Rebbie’s 1988 opus, ‘R U Tuff Enuff’), Tito Jackson, Vassal Benford, Howie Rice and Reggie Lucas. As a result it’s less cohesive. The title cut, a thumping ’80s dance groove with a robotic drum machine and metallic synth parts, was a Top 20 US R&B hit and sounds more than a tad dated now. The same can be said for all the uptempo cuts, though the sentimental ballad, ‘You Send The Rain Away’ – a duet with Robin Zander – offers a brief respite from crude, crashing, programmed dance beats and tinny synthesisers. The package is worth listening to, though, for the ‘Centipede’ album.