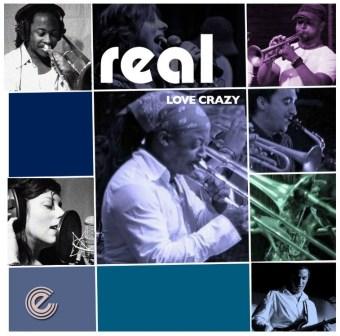 Modern soul brand leader, Expansion Records, enter the 2013 fray with, what is for them, an unusual album… and unusual in a number of ways. The label is rightly famous for its wonderful Ralph Tee/Richard Searling soul compilations though it also specialises in quality reissues of in-demand back catalogue, single artists sets –witness their recent endeavours with Kwick and High Fashion.

Occasionally, Expansion does issue brand new product but the sound of said product is usually right on the fashionable modern soul vibe (I’m thinking of the label’s work with Kloud 9).

This new release is neither a compilation nor a reissue; it’s a brand new recording – and more than half the cuts on Real’s ‘Love Crazy’ don’t quite represent the Expansion signature sound. You see, Real are essentially a hard-gigging funk outfit. The duo – singer/songwriter Louise Pollock and her “other half”, trombonist/keyboardist/bassist/producer/arranger Winston Rollins (who’s worked with people like Jamiroquai, Aswad, Jools Holland, Courtney Pine, Incognito and the Brand New Heavies ) – already have one album under their belts. That LP, ‘Give Me A Reason’, was, honestly, big in Japan and has since become a collectors’ item in Europe and this new 15 tracker kicks off where that one finished with the slow-burning title cut. ‘Love Crazy’ sets the tone for the insistent funk of ‘Reality’ which like the raucous ‘Wot The Funk’ might remind soul long beards of Rufus.’Round And Round’ is frantic too while I wonder what the modern soul crowd will make of the wild rock guitars on ‘Satisfaction’. Add to those the Latin swayers that are ‘Tomorrow’s Here’ and ‘Far Away’ and you’ll start to understand what I meant when I said that ‘Love Crazy’ isn’t your standard Expansion fare.

That then leaves a clutch of cuts that probably persuaded the boys at Expansion to get behind the album. Best of that bunch is great modern soul vibe called ‘Luther’. Lyrically I don’t think it makes reference to Luther Vandross but sonically it’s a tribute to his music – busy and persistent, it even features layered vocals and swirling strings. Almost as good is ‘Complicated’. Here the palette is classic Drizabone while ‘Give It Some Love’ and Trouble’ are clearly influenced by Rollins’ time with Incognito and the Brand New Heavies.

Yes, ‘Love Crazy’ is something of a soul mixed bag but whether it indicates a musical change of direction for Expansion, only time will tell.