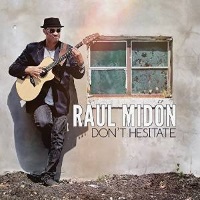 New Mexico’s Raul Midon is one half of a set of twins. Both boys were blinded at birth as a result of an incubator malfunction and, growing up, their Argentinean father used music as a therapy. He instilled his sons with a love of the folk music of his native country and the soul and jazz of his adopted home. Though his brother ended up working for NASA, Raul choose music as his career path and after taking up drumming he went on to master the guitar – and studied jazz at Miami University. On graduating he became a part of that city’s vibrant music scene and even got to work with legends like Julio and Enrique Iglesias.

In 2002 Midon gravitated to New York and between playing solo bar gigs he also worked with Little Louie Vega which raised his NY profile considerably. Raul eventually attracted the attention of Arif Mardin and he debuted in 2005 with the criticality acclaimed album ‘State Of Mind’. The LP announced the arrival of a unique artist whose music defies easy pigeon-holing. Pop any Raul Midon album into your I-tunes and it will class its genre as “R&B” and though there’s a soulful undertow to everything Midon touches, his music isn’t brash and braggardly contemporary R&B. There’s an obvious jazz current running through his work and given his background and time in Miami, the Latin influences are obvious too. Then there are the subtle harmonics – evoking the sweetness of rock icons Crosby, Still and Nash while many of his melodies are sweet enough to grace the pop charts in the way that the songs of James Taylor did. Lyrically, though, Midon’s themes and message are often complicated and controversial (for instance, on this album, he opens with a song that explores the sensitive issue of illegal Mexican immigration to the US). A complex artist, then whose music can’t really be pinned down…. but maybe think Paul Simon meets Bill Withers with an instrumental garnish of Earl Klugh.

The Bill Withers reference, by the way, is pointed since the reclusive Withers offers a rare cameo appearance on this new Midon album. Bill duets with Raul on the gritty ‘Mi Amigo Cubano’ and it’s an obvious album highlight. Other marquee names who feature on the LP are Dianne Reeves and Lizz Wright. Ms Reeves features on the stark ‘Make It Better’ while Ms Wright is there on the gentler ‘Keep Holding On’. Other album highlights include the despairing but lovely ‘Was It Ever Really Love’ and the layered ‘God’s Dream’. The album oddity (and the only cover) is a take on the Who’s ‘I Can See For Miles’. Its choice reveals the kind of irony that Midon has become known for and the perceptiveness of the songs on ‘Don’t Hesitate’ show that our man can see for miles and miles… certainly further than many other artists.