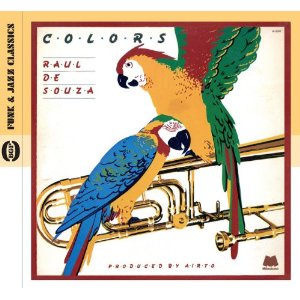 This was Brazilian trombonist Raul De Souza’s debut LP for Orrin Keepnews’ Milestone jazz label. It was first released in 1975 and now something of a collectors’ item, it’s been revived by Ace’s BGP imprint. It’s a fine fusion set laced with piquant touches of Brazilian flavouring and the occasional soupçon of greasy funk. At the production helm is De Souza’s fellow countryman, legendary percussionist Airto Moreira who enlisted famous US bebop trombonist, J. J. Johnson, to arrange a six-piece horn/reed section. With Jack DeJohnette on drums (he played with Moreira in Miles Davis’s early ’70s band), Richard Davis on bass, and a couple of strong cameos from alto sax giant, Cannonball Adderley, ‘Colors‘ turns out to be a hugely enjoyable set. There’s a superb rendering of the Joe Zawinul-penned ‘Dr Honoris Causa’ (originally written as a tribute to Herbie Hancock) with De Souza bringing new sonorities to the melody line, thanks to the rich, full-bodied tone of his trombone.

Cast from a different mould is ‘Festival,’ a highly propulsive Latin-inflected groove driven by a Brazilian samba beat and dominated by oodles of percussion. Another highlight is ‘Canto De Ossanha,’ a swaggering large ensemble piece featuring some great interplay between De Souza and Cannonball Adderley (sadly it was one of Cannon’s last sideman appearances – he died nine months later). A lovely, plaintive version of Chick Corea’s ‘Crystal Silence’ demonstrates (especially in its ruminative opening before the song really takes off) that the Brazilian trombonist could play with great sensitivity when required. After this impressive album – his first in the USA – the hirsute De Souza (who boasted a humongous Afro hairdo) signed to Capitol in the late-’70s and recorded three LPs (including the excellent ‘Sweet Lucy’). But it was with ‘Colors’ that his reputation started to grow.