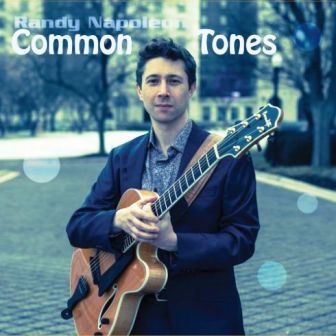 Michigan guitar man Randy Napoleon was once described as “the forward thinking, tradition loving jazz guitarist” and listening in to ‘Common Tones’, his just released 13 tracker, you can hear why. The set is a well-balanced mix of pop covers, Napoleon originals and takes on the Great American songbook … traditional and contemporary in equal parts but all delivered in a thoroughly 21st century manner.

Nowhere is that best illustrated than in the opener – a swinging version of Brian Wilson’s ‘Wouldn’t It Be Nice’. Like the jazz guitar greats before him (notably Wes Montgomery), Napoleon shows that a great tune transcends genre. Here he makes the Beach Boys’ classic really swing in the manner of the best soul-jazz. Amongst the other covers are versions of Rodgers and Hart’s ‘I Married An Angel’, Hammerstein and Kerns’ ‘The Song is You’ and Donald Walden’s ‘Signed Dizzy With Love’. The late Walden in fact was one of the guitarist’s teachers and the track is included in homage to him as is the poignant ”If DW Were Here’ – six minutes plus of gentle guitar and piano (courtesy of Xavier Davis) duelling. Here Randy avoids, as Walden regularly advised, the obvious.

Napoleon was also tutored by the bebop trumpeter Louis Smith and homage his paid via the track ‘Mr Smith’ – a cheerful bebop outing that recalls the great Grant Green. The delightful trumpet part here comes from Etienne Charles. Not sure whether Mr Charles was a student of “Professor” Napoleon (Randy is indeed a respected music teacher) but we’re told that many of the players on ‘Common Tones’ have had the benefits of his teaching. Thus to get back to where we came in, these new, young players collaborating with their tutor keep the evolutionary process flowing… yes, plenty of tradition here but also plenty of movement and contemporary flourish.