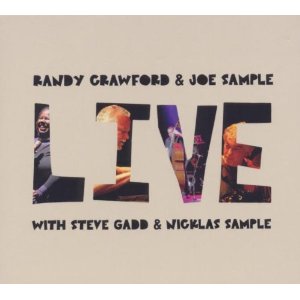 With her sensuous, velvety delivery and tremulous vibrato, Randy Crawford possesses one of the most expressive and soulful voices in pop music. Sadly, new recordings from the Georgia-born chanteuse have been few and far between during the last couple of decades but her many fans can finally rejoice with the release of this freshly-minted live album that captures the singer during a 2008 tour of Europe.  It was recorded in tandem with ex-Crusaders’ pianist, Joe Sample – with whom Randy successfully collaborated on a couple of albums in 2006 and 2008 – and features Sample’s son, Nicklas, on stand-up bass, and the redoubtable Steve Gadd on drums.

The recording quality is excellent and it’s matched by the performances of Randy and the Joe Sample-led trio. Randy’s voice is superb throughout and the passing of time hasn’t diminished her voice’s emotional power; in fact, it’s added a greater lustre to it – she simply shines on stylish renditions of jazz standards like ‘This Bitter Earth,’ ‘Feeling Good’ (the old Nina Simone number), and Billie Holiday’s ‘Tell Me More And More And Then Some.’ Thankfully, she doesn’t ignore her own back catalogue and delivers some wonderful renderings of some of her most famous and enduring numbers, including ‘Rainy Night In Georgia,’ and ‘Street Life,’ which has a funkier feel than the Crusaders’ ’79 original. By contrast, ‘Last Night At Danceland’ is delivered in a jazz-infused style while Randy’s performance of the ballad, ‘Almaz,’ is even more heartrendingly poignant than the singer’s indelible 1986 recording.

Most affecting of all is a truly haunting rendition of ‘One Day I’ll Fly Away,’ which demonstrates Randy Crawford’s peerless ability to take a lyric, invest it with the drama of deep emotion and bring the song’s story vividly to life. Joe Sample’s presence is also a key factor on this recording: his intuitive and sympathetic accompaniment undoubtedly brings out the best in Randy, who – to this writer’s ears – has never sounded better. ‘Live’ is a terrific CD and a timely reminder of Randy Crawford’s incredible vocal talent.