RANDA AND THE SOUL KINGDOM: What You Need (Freestyle) 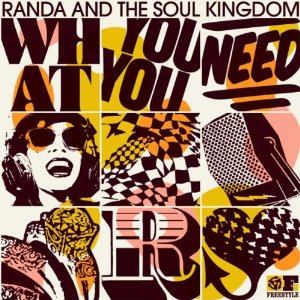 Over the last couple of years Australia has developed a lively home-grown soul scene and Aussie bands and artists have created some decent soul. Perth-based Randa and the Soul Kingdom have been a key component of the new Aussie soul scene and with ‘What You Need’ (their second long player) they’re about to consolidate that position.

Soulstress Randa was born in Jordan but was raised in Australia and she and her Soul Kingdom debuted in 2010 with an eponymous set that won favour from tastemakers like Mark Lamarr. The underground success of that album gave her the ability and confidence to come to London to develop her sound and style and on ‘What You Need’ there’s a real maturity about her take on soul and funk. Clearly Randa’s been listening a lot to people like Marva Whitney, Ann Sexton and Vicki Anderson and on cuts like ‘Power In Me’ there’s a real attack. Funkiest cut is the ultra sparse ‘Watch It’ on which producer – the Bamboos’ Lance Ferguson (aka Lanu) does a great job re-creating the sound of the JBs.

Ferguson’s been round the block enough to know that a full funk album is sometimes hard to digest, so, though funk is the set’s main thrust, he offers enough variety to maintain interest. ‘Save Us’ is his and Randa’s take on Northern soul and yes, it’s built around a fast and insistent beat but they don’t quite get it right. Few do… you need to have been at the Wheel, the Casino or the Torch to fully understand and to recreate the authentic sound takes more that 100mph beats. ‘Be Yourself’ is another fast and frantic effort while ‘Slide’ gives Randa the chance to show her moody side. Totally different is ‘The Things’ which is almost disco though the band keeps it funky and rooted.

‘What You Need’ will be released on October 24th.